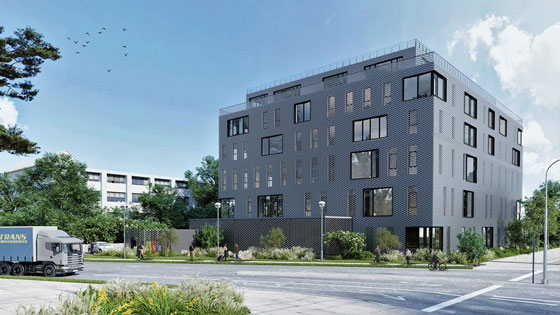 In a city clearly in the throes of urban change, where the densification of industrial and artisanal zones is bringing its fair share of opportunities, a new industrial hotel was inaugurated on 22 September this year in Geneva’s Zimeysa district.

Orchestrated by the company Altitude Fiduciary Advisors (AFA), this four-storey industrial hotel with an attic was designed by the Strata architectural office. The design, which is based on raw materials, is influenced by the Italian “arte povera” art movement.

The building is encased in an expanded metal façade, inspired by moucharabiehs. These partitions are frequently used in traditional architecture in Arab countries to let in soft, filtered light and regulate the temperature inside the building. This raw metal cladding, gently shimmering with the glimmer of the sun, brings a flow of light through the many windows that enliven the building while discreetly preserving the work of the artisans. Inclusions are made to leave room for large windows that are bevel-cut like diamonds.

The entrance to the building is discreet, yet clearly expressive. As soon as you enter the building, you are greeted by the Hand, a work by Geneva sculptor Vincent du Bois. This sculpted hand and its pixelated outline represent all the values driving this place and its tenants: expertise, excellence, precision and manual work, while adding the fact that robotisation has found its place among the production methods.

The play of materials exercises a major role in this new 21st century studio featuring a mix of raw and noble materials. The walls are made of raw concrete, while the floor of the common areas is made of terrazzo, composed of natural stones, marble fragments and polished cement.

The exterior was designed to blend in with the natural surroundings. Opting for an ecopark approach was an obvious choice. The rainwater stored on the roof runs down the façade to be collected in a landscaped ditch which channels the rainwater into a small pond, thus enabling the water to be reinfiltrated into the soil and feed the vegetation. In the event of exceptional rainfall, the water is directed towards the Nant d’Avril river.

Always with a view to respecting the environment, the creators of this craft centre have opted for local and renewable energy. Heat is produced by a heat pump linked to the FAD Zimeysa industrial services’ remote cooling network, connected to the Peney wells.

The building itself offers future tenants the finest synergies and a unique experience. This is expressed firstly by the mutualisation of the majority of the technical infrastructure. Secondly, the entire structure of the building was designed to meet the needs of the future tenants: a useful ceiling height of up to 4.10 metres, concrete slabs that can support loads of one tonne and a lift that can withstand a weight of 5 tonnes. Deliveries are done via two platforms that can be closed off for safe and discreet unloading.

This industrial hotel offers fully modular surfaces from 200 sqm. It is even possible to make a cut in the expanded metal, the building’s outer shell, and include a new large window or remove the expanded metal around an existing window by means of a simple unclipping system. The bespoke effect is totally embedded in the minds of the designers.

Basically, the entire project was designed as “plug & play” ready-to-use spaces to start developing, creating, imagining and writing a new chapter of the Cabinotiers tradition.