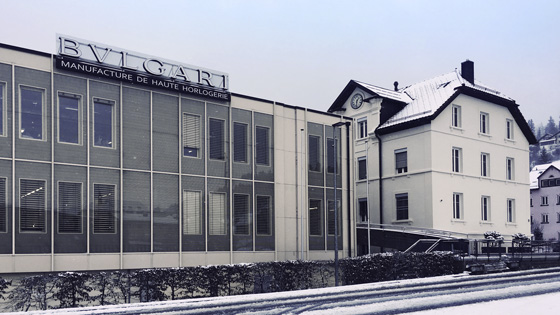 While Bvlgari has excelled in the world of jewellery for more than a century, it is also renowned for its watchmaking exploits.

It is at the heart of the Manufacture in Le Sentier that the grand complications which have forged its reputation in this sector of activity over the past few years are born – and in fact all the mechanical movements produced by the Maison.

Since 1884, when it was founded in Rome, Bvlgari has been mainly known for its jewellery creations. Over time, other areas have expanded this core business, namely perfumes, accessories, watchmaking and, more recently, the hotel sector. On this winter morning, we are following in the footsteps of the watchmakers of the Vallée de Joux as we set off to discover the Manufacture where Haute Horlogerie timepieces are made. At the heart of this historic building, which was extended in 2010, there are no signs of ostentation. Simplicity, efficiency and humility are the watchwords of the place and the specialists who welcome us. It is within these workshops, which we will visit, that the complications of the house are born, including the Octo, which has set five world records in the last five years. It is also where the Serpenti, Diva’s Dream and Lvcea collections came into being.

It all begins in the technical department where the projects of the designers, based at the parent company in Neuchâtel, arrive. The two teams work closely together on each project. The draughtspersons & constructors thus bring the creations to life, taking into account the multiple and rigorous requirements set out in the specifications. Several years may be required to create a new model, bearing in mind that many prototypes are produced before the final validation, i.e. the production of all the components.

The next step takes place in the workshops where numerous CNC machines serve to cut the movement plates, bridges and other sometimes infinitely small components. Cases and dials are made in Saignelégier by the new Manufacture specialising in watch cases and dials, which was inaugurated last autumn. All the decoration stages (circular graining, Côtes de Genève, satin-finishing, straight graining, hand-bevelling, etc.), whether manual or semi-automated, as well as component polishing, are also carried out in-house. Some 80 people work at Le Sentier and among them 30 different trades are represented, including watchmakers, of whom there are around 30.

Grande Sonnerie and minute repeater workshop
At the end of the visit, we are introduced to watchmakers’ “holy grail”: namely the area dedicated to Grandes Sonneries and minute repeaters, where four specialists exercise their craft. This is also where skeleton movements or major complications, such as tourbillons, come to life. Assembling such calibres requires great dexterity and patience. These qualities are multiplied tenfold when it comes to the assembly of calibres equipped with striking mechanisms comprising 700 to 1,200 components. For example, only two to four Octo Grande Sonnerie Perpetual Calendar models emerge from these workshops each year, as the design of this luxury watchmaking complication requires some four months of assembly.

The Octo Saga
Among the Haute Horlogerie timepieces born at the heart of the Valley in recent years is the Octo, whose journey has already been marked by five world records.

In 2014, Bvlgari unveiled the Octo Finissimo Tourbillon. The quest for thinness is one of the directions long since pursued by watchmaking. The brand took the plunge with a step forward in the field of ultra-thin watches by unveiling this timepiece with a movement measuring only 1.95mm thick, making it the thinnest flying tourbillon on the market without any other equivalent and the thinnest ever made. The watch itself is just 5.00mm thick.

The Octo saga pursued the theme of extreme thinness. In 2016, the Octo Finissimo Minute Repeater took the title of the thinnest complication in its category on the market. The design of a striking watch presupposes a certain number of special construction constraints as well as extreme mastery in order to achieve the best possible result, namely a crystal-clear, intense sound whose cadence is perfectly uniform and regular when the mechanism is activated. The Manufacture in Le Sentier started from scratch by reviewing all known data inherent to this mechanism and took a new step in the world of Haute Complication watchmaking. The Calibre BVL 362, developed and produced in-house, is 3.12mm thick, fitted inside a 6.85mm-thick case.

Bulgari was once again in the spotlight in 2017... For the third time, the company set a new world record by presenting the Octo Finissimo Automatic, the finest self-winding watch on the market. Developed in Le Sentier, the movement – Calibre BVL 138 – powering this timepiece is only 2.23mm thick. Further refinement is provided by a small off-centre seconds hand. The mechanism operates at a frequency of 21,600 vibrations per hour and has a 60-hour power reserve. Automatic winding is carried out by a platinum microrotor, a guarantee of efficiency.

Octo Finissimo had yet another stellar year in 2018, when Bvlgari presented a new breakthrough in the field of extreme thinness: a timepiece measuring just 3.95mm thick. The Octo Finissimo Tourbillon Automatique set a fourth new watchmaking world record. In order to achieve this degree of slimness, the company’s designers were able to find technical solutions for the overall construction, combining exceptional know-how with respect for a design and a model that have both become emblematic. The BVL 288 Finissimo calibre is only 1.95mm thick and has a 52-hour power reserve. It is housed in a sand-blasted titanium case revealing the completely openworked skeleton movement displaying all its mechanical intricacies.

Last but not least, in 2019 the Octo Finissimo Chronograph GMT Automatic set the fifth record for this product family, namely the thinnest of all existing ultra-thin mechanical chronographs. Equipped with a GMT function, the integrated movement is only 3.3mm thick. This new record, which embodies the quintessence of the Octo, testifies to the mastery of the Vallée de Joux-based company in the field of Haute Horlogerie.

While the Octo Finissimo enjoys pride of place with its five records, it does not overshadow the other complications created by the Manufacture in Le Sentier, such as the Diva Finissima Minute Repeater the Diva’s Dream Divina Phoenix Tourbillon, the Serpenti Seduttori Tourbillon, the Serpenti Incantati Skeleton, and so on. Born in the Vallée de Joux, these complications are making their mark around world and consolidating Bvlgari’s credentials in the world of Haute Horlogerie.