The APRP company is so successful that it has tripled the floor space of its production site. The official inauguration took place on 24 September last.

The history of fine luxury watchmaking has been marked by many encounters… In 1986 two watchmakers who had trained at Audemars Piguet in Le Brassus, Dominique Renaud and Giulio Papi, decided to set up in business on their own and founded their company to make complicated mechanical watches. Incorporated as a partnership and then converted into a limited company, the business developed rapidly, first in Vallée de Joux and later, after 1990, in Le Locle. It began to look for a partner. In 1992, Audemars Piguet became the majority shareholder and the company was renamed Audemars Piguet (Renaud et Papi) SA. Over the years it has become a leader in the production of highly sophisticated timepieces. That success created the need for a much larger production site. The available floor space was tripled to 2,800 m2 on the basis of a futuristic architectural project (see photo below) with the emphasis on light and serenity.

The cantonal authorities and many guests, including the Alinghi helmsman Russell Coutts and the world's trade press, were invited to attend the inauguration of this new complex at Rue James Pellaton 2, on 24 September. On that occasion the traditional ribbon was cut by Georges-Henri Meylan and Jasmine Audemars, managing director and chairperson of the Board of Directors of Audemars Piguet respectively, assisted by Neuchâtel State Councillor, Bernard Soguel (from left to right in our photo Leuenberger - Société neuchâteloise de presse).

Today the output of APRP is mainly intended for Audemars Piguet which takes around two-thirds of the 600 or so pieces manufactured each year, while the remainder go to some ten other customers. The development of new functions, the search for innovative manufacturing methods and use of materials hitherto unknown in watchmaking have enabled APRP to design and make exceptional timepieces, such as the Jules Audemars chiming minute repeater for ladies, the Dynamograph and Jules Audemars chiming grand strike with a strike reserve indication, the Edward Piguet tourbillon with a bottom plate in rutile quartz (see photo), the Jules Audemars big date tourbillon with minute repeater and perpetual calendar and the Edward Piguet dynamograph and tourbillon with chronograph and power reserve indication and, more recently, the Royal Oak Concept watch.

From the initial design to the prototype stage, from manufacture of movement blanks to delicate finishing and assembly operations, the company makes remarkable calendar and tourbillon watches and rare striking watches which are marvels of precision and harmony. Its innovative spirit, manufacturing methods which are among the most advanced and perfect technological mastery soon gained it an excellent reputation, which explains why some of the most prestigious watchmaking houses have been attracted by its expertise.

The specific character of APRP, the personality of its founders (our photo shows Giulio Papi) and its exacting standards have enabled it to build up an extraordinary team consisting today of around one hundred persons of fifteen different nationalities with a mastery of no less than 22 different trades. This workforce is as highly qualified as it is young: the average age is just 30 years!

While the sluggish economy has left its mark on a good many watchmaking companies, that is not the case at Audemars Piguet which has for several years been surfing the wave of success, further amplified by the victory of Alinghi in the last Americas Cup. The company based in Le Brassus, which employs 550 persons, currently makes 18,000 watches each year selling at an average price of 8,000 francs. Its sales worth 200 million francs are shared between Europe (40%), Asia (41%), the Americas (15%) and the rest of the world (4%). The only thorn in the side is the fact that the success of the Royal Oak range, which accounts for 67% of this year's sales against 51% last year, is overshadowing the other product lines. But Georges-Henri Meylan intends to correct that shortcoming in the near future, in particular by adding more articles for women to the collection. 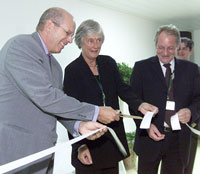 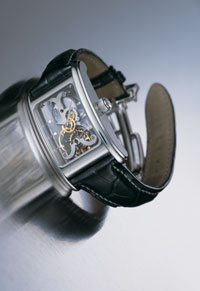 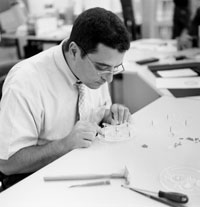