From the origins to the present day

From the origins to the present day

For more than four centuries, tradition, expertise, advanced technology and innovation have allowed the Swiss watch and clock industry to maintain its leadership on the world market. Despite or because of the crises it has endured, it has always managed to overcome the technological, structural and economic challenges placed before it. Its exceptional dynamism and creativity have made it a state-of-the-art industry. The many inventions and world firsts to its name provide particularly flattering and envied examples of its status: first wristwatch, first quartz watch, first water-resistant wristwatch, world’s thinnest wristwatch, world’s smallest wristwatch, most expensive watch, and many more…

The Swiss watch and clock industry appeared in Geneva in the middle of the 16th century. In 1541, the reformer Jean Calvin, by banning the wearing of ornamental objects, in effect forced goldsmiths and other jewellers to turn to a different art: that of watchmaking. By the end of the century, Geneva had already acquired a reputation for excellence and in 1601 the Watchmakers Guild of Geneva was established, the first of its kind in the world. 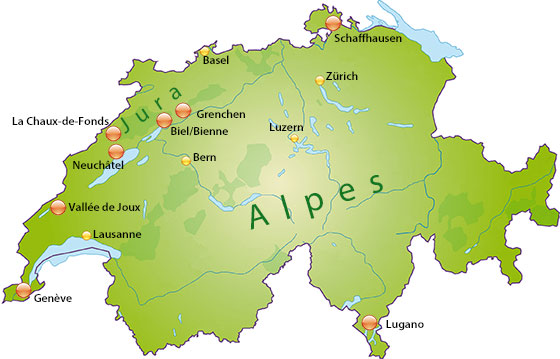 A century later, because the city had “too many” watchmakers, many started leaving the Geneva region to set up business in the Jura mountains.

Development of the watch and clock industry is closely bound up with the genius of goldsmith Daniel Jeanrichard (1665-1741) who was the first to introduce the division of labour with the system of “établissage” (independent workshops). In 1790, Geneva was already exporting more than 60,000 watches.

Many inventions and developments followed over the centuries. For example in 1770, Abraham-Louis Perrelet created the “perpetual” watch (in French “montre à secousses”), considered by many to be the forerunner of the modern self-winding watch. In 1816, Louis Moinet made the first chronograph, called “compteur de tierces”. In 1842, Adrien Philippe, one of the founders of the prestigious Patek Philippe manufacture, invented the pendant winding watch. At the same period, the production of complicated timepieces (chronographs, etc) and the introduction of functions such as the fly-back hand and the perpetual calendar, began to flourish.

The mass production of watches began at the turn of the 20th century as a result of research carried out by renowned watchmakers such as Frédéric Ingold and Georges Léschot. Increased productivity, interchangeable components and standardisation allowed the Swiss watch industry henceforth to extend its world supremacy.

The end of the First World War coincided with the introduction of the wristwatch, and its traditional round shape was adopted once and for all in the early 1960s. In 1926, the first automatic or self-winding watch was produced in Granges, while the first electric wristwatches made their appearance in 1952.

1967 saw the development, by the Centre Electronique Horloger (CEH) in Neuchâtel, of the world’s first quartz wristwatch, the famous Beta 21. Major developments and innovations then followed without interruption: watches with LED and LCD displays, quartz watches without a battery, new materials, etc.