A look back at the 22nd GPHG 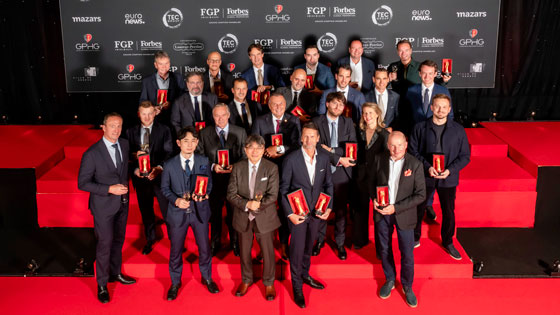 MB&F received a crowning honour by winning the “Aiguille d’Or” Grand Prix along with the Challenge Prize. Several brands also won two distinctions, including Hermès, Van Cleef & Arpels and Bulgari. Hosted by Edouard Baer, the evening kept the entire watchmaking microcosm on tenterhooks, both at the Théâtre du Léman and online.

Some 1,350 people turned out for the 22nd Grand Prix d’Horlogerie de Genève (GPHG) ceremony held at the Théâtre du Léman on 10 November. Hosted by Edouard Baer, the evening was full of wit and humour. Once again, tradition and innovation were honoured through the 90 nominated timepieces and clocks. Twenty-one prizes were awarded to laureates including several young firms, such as Trilobe, which is celebrating its fourth anniversary this December, along with others who are long-established members of the watchmaking family.

Double winners
As every company likes to point out, winning a distinction at the Grand Prix d’Horlogerie de Genève puts a brand in the spotlight. Some of them had the great privilege of being awarded two prizes. MB&F received the ultimate accolade, the “Aiguille d’Or” Grand Prix, for its Legacy Machine Sequential EVO model, a timepiece featuring two complete chronograph displays, each of which can be started, stopped and reset completely independently. The model also features a revolutionary “Twinverter” binary switch enabling multiple timing modes: fractional seconds, sequential and even a cumulative “chess match” mode – an unprecedented combination. The Geneva-based company also won the Challenge Prize, which rewards a watch with a retail price of 3,500 francs or less, for its M.A.D. Editions M.A.D.1 Red model, a piece that required seven years of research and development as well as a great deal of patience on the part of all the teams, as pointed out by MB&F’s owner and Creative Director Maximilian Büsser.

Hermès scored a distinctive success by winning two prizes for the same timepiece – Arceau Le temps voyageur – but in different sizes and materials. The dial displaying the hours and minutes travels across time zones and thus accompanies globetrotters in a poetic way.

Van Cleef & Arpels continues to inspire devotees of fine watchmaking with its feminine Lady Arpels Heures Florales Cerisier composition, whose three-dimensional dial reveals flowers that open and close as the hours pass, renewing the scene every 60 minutes. In the new Mechanical Clocks category, the Fontaine aux Oiseaux automaton won over the GPHG experts. Combining animation on demand with retrograde time display, this creation stages a double show. On the base, a feather progresses daintily along the time scale. When activated, the automaton reveals the ballet of two birds courting each other on the edge of an animated fountain whose water quivers, along with a water lily in full bloom and a dragonfly taking flight.

Another double win of the evening was achieved by Bulgari, a regular recipient of GPHG awards. The Serpenti Misteriosi High Jewellery combining technical and jewellery prowess appealed to the jury. This “secret” watch beats to the rhythm of the smallest hand-wound mechanical calibre ever made by Bulgari. It combines spectacular craftsmanship with high-level decorative excellence. Wrapping around the wrist with ease and elegance, this jewellery masterpiece is adorned with turquoise inlays, brilliant-cut diamonds and bewitching rubellite eyes. The Octo Finissimo collection, which has already garnered several awards, won the Audacity Prize for its 10th anniversary Ultra version. This timepiece featuring a total thickness of just 1.80mm set the collection’s eight consecutive world record. Sporting a monochromatic look in sandblasted titanium, this watch pairs its ultra-thin case with an integrated bracelet measuring a mere 1.50mm thick, while the dial invites a closer look at the details of the mechanism. A unique QR code engraving offers the possibility of connecting to an NFT and the metaverse, linking the mechanical world to the digital dimension.

Honouring passionate enthusiasts
Rewarding a personality, an institution or an initiative having played a fundamental role in the promotion of quality watchmaking, the Special Jury Prize was awarded this year to automaton-maker and sculptor François Junod. Another watchmaking personality to receive an award was Sylvain Pinaud, who won the “Horological Revelation” Prize, honouring a young brand less than ten years old. A year ago, this enthusiast was still working alone at his workbench on bringing to life his crazy dream, the Origine timepiece. Winner of the 2022 prize for the Best Young Student at the Geneva School of Watchmaking, Simon Debaz finished his first year with a 6 out of 6 grade point average. Having entered watchmaking somewhat by chance, he is now passionate about this art and already dreams of working for a major Manufacture.

Exhibitions of the nominated timepieces
Before finding themselves in the spotlight of the Grand Prix d’Horlogerie de Genève, the 90 nominated watches and clocks made a stopover in New Delhi (8 and 9 October) at the Leela Palace. This event began with an official reception at the Swiss Embassy residence where experts and collectors enjoyed a rich programme of meetings and debates organised by Ethos Watches, which partnered this exhibition.

The timepieces then flew to the African continent, a first for the GPHG. The exhibition held at the Villa Roosevelt in Casablanca was inaugurated on 20 October in the presence of Othman Benjelloun, President of the Bank of Africa, and Guillaume Scheurer, Swiss Ambassador to the Kingdom of Morocco. It remained open to the public for three days.

The timepieces created by over 50 brands were then presented from 2 to 20 November at the Musée Rath in Geneva. This exceptional exhibition gave rise to an unprecedented dialogue with heritage works selected from the watchmaking collections of the Musée d’art et d’histoire (MAH) and the Musée international d’horlogerie (MIH) in La Chaux-de-Fonds. Besides offering an extraordinary panorama of watchmaking creativity past and present, this exhibition gave visitors the opportunity to better grasp the magic of timepieces by taking part in guided tours, talks and introductory workshops organised with the Geneva School of Watchmaking.

The roadtrip finally came to an end in New York with an exhibition organised in partnership with Watches of Switzerland (1 to 4 December).

Wide broadcasting
The Grand Prix d’Horlogerie de Genève awards ceremony was livestreamed on the GPHG website, simultaneously translated into French and English, as well as by numerous media partners around the world. Euronews, Europe’s leading news channel, broadcast the ceremony live on its website in several languages. Hantang Culture, an exclusive Chinese media group, covered the event on its many channels. Finally, the Geneva-based television channel Léman Bleu broadcast the event in deferred mode.