Changes at the head of Convention Patronale 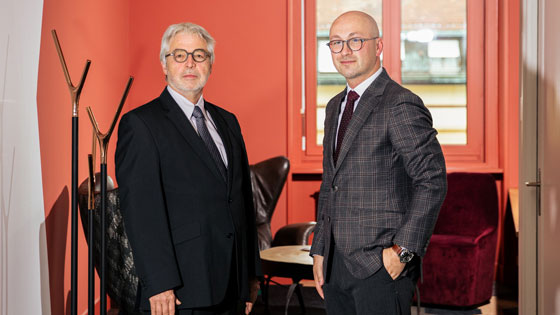 A graduate in marketing and communication, Ludovic Voillat (36) began his career in the media, digital marketing and recruitment before taking up the post of head of the CP’s Communication and Digital Department for nearly seven years. A father of two and a resident of Val-de-Ruz, he has a transversal vision of the CP’s activities and has been involved in numerous activities related to the General Secretariat and employers’ policy, including a negotiation of a collective labour agreement (CLA). In his current position, he has worked to digitalise and modernise the CP’s communications and corporate image.

François Matile has been with the CP for 32 years, of which 24 as Secretary General, and will retire on 31 October. During this time, he has driven and guided the development of an umbrella organisation in the wake of changes within an economic sector that has seen its workforce grow from 34,000 to 57,000 during his term of office. He took part in, or led, six CLA negotiations with the trade unions and made a major contribution to increasing the services provided by the CP to companies in the sector.

There will also be changes in the vocational training department of the CP. Marion Vermot is taking over from Séverine Favre, who has decided on a career change after more than 12 years with the CP. The department has been operating under the leadership of the pair before Marion Vermot took over full responsibility at the end of July.

Marion Vermot holds a CFC in microtechnology construction, a profession she exercised for more than ten years in several watchmaking factories. She then worked in the post-compulsory training and guidance department of the canton of Neuchâtel as a vocational training advisor and inter-company course supervisor. There she acquired a thorough understanding of the workings of vocational training and the essential interactions between OrTra (professional organisations), the cantons and the Confederation.

This dual experience makes her perfectly suited to her new position, especially as she is arriving in familiar territory. Marion Vermot has been active in several technical working groups and has also participated as an expert in the qualifications for the next Swiss Microtechnology Skills Championships (SwissSkills) organised by the CP.

The Swiss watch industry employers’ association is the organisation responsible for training in the industry. It is in charge of eight professions, several private training courses and leads some 30 working groups responsible for developing, maturing and bringing to a successful conclusion the numerous dossiers placed under its supervision.