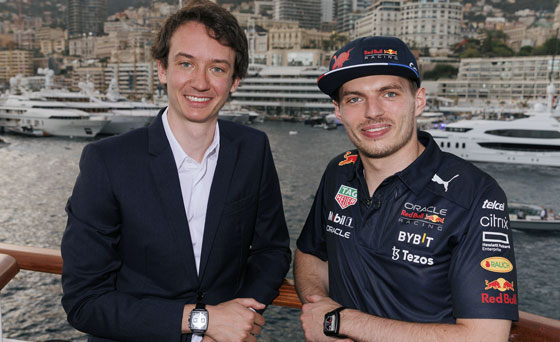 TAG Heuer kicked off the 79th Formula 1 Monaco Grand Prix of which it is the Official Watch since 2011.

Hosting guests from around the world to experience the most iconic and glamorous race in the F1 season, TAG Heuer took over the Jacques Cartier ship docked in the unmistakable Port of Monaco for a weekend celebrating speed and performance.

On this occasion, Oracle Red Bull Racing driver and reigning F1 World Champion Max Verstappen was presented with a newly released and exclusively personalized TAG Heuer Monaco chronograph. The custom piece sports special red “1” markings on the dial and case back, as a nod to his #1 racing number for 2022 which he chose after his championship victory last season. Symbolically the sapphire crystal case back also features an engraving of the Monaco Grand Prix circuit where he was victorious in 2021, with a bespoke TAG Heuer Monaco on the wrist already.

The crowd of racing enthusiasts and TAG Heuer fans were treated to a first-hand debrief of the day’s qualifying session with the racing driver. He shared his impressions of the day and insights on the upcoming race and rest of the season.

During this iconic motor-racing event, TAG Heuer also welcomed Australian actor Jacob Elordi to its family of ambassadors. The rising film star will be the face of the TAG Heuer Monaco.

At the end of the long-awaited race, Mexico’s Sergio Pérez topped the standings, with a custom TAG Heuer Carrera on his wrist.