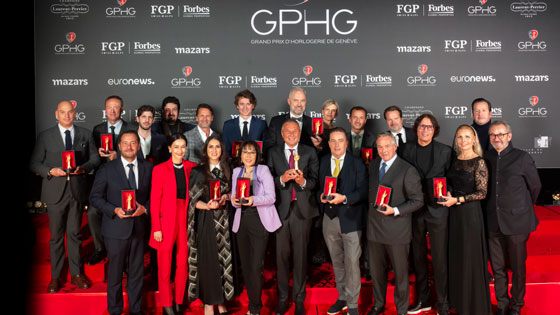 For its 21st edition and at the same time celebrating its 20th anniversary, the Grand Prix d’Horlogerie de Genève played out in front of a full house at the Théâtre du Léman.

Some came on stage twice, while others had travelled far to be there. What brought them together was, above all, an enduring love of fine watchmaking.

At this awards ceremony, which took place on November 4th, the red balloons of the previous edition were replaced by a room full of people who were particularly enthusiastic about getting together to celebrate watchmaking. Edouard Baer, true to form, had fun hosting the evening and interacting with a very real audience this time.

Representing the very essence of watchmaking, timepieces constantly reinvent themselves and push boundaries. Some celebrate time, while others are transformed into objects enabling their wearers to slip free of its bonds, or else capture its slightest movements... as the master of ceremonies enjoyed reminding us.

The emotion was tangible as Raymond Loretan, President of the Foundation of the Grand Prix d’Horlogerie de Genève, expressed his delight in finding himself face to face with the 1,350 or so members of the grand watchmaking family who had come to participate in this special edition.

This year, the Aiguille d’Or “Grand Prix” rewarded Bvlgari and its Octo Finissimo. This asymmetrical design housing a remarkably thin movement notably features a perpetual calendar driving a retrograde date display on a model that clearly won over the jury.

Beyond borders
The GPHG embodies a vision of watchmaking that brings people together – and not just the Swiss. This year, alongside Bvlgari (“Aiguille d’Or”), several Maisons based beyond our borders were called upon to take the stage. Grand Seiko (Japan) was singled out in the Men’s Watch category, Christiaan Van Der Klaauw (Netherlands) for the Calendar and Astronomy Watch Prize and Ciga Design (China) for the Challenge Prize.

The Special Jury Prize, which rewards a personality, an institution or an initiative that has played a fundamental role in promoting high-quality watchmaking, was presented by Nick Foulkes (President of the Jury) to Dubai Watch Week, represented by Hind Seddiqi, Director General of the watch show.

A newcomer to the world of time, Furlan Marri received the “Horological Revelation” Prize. Using crowdfunding as its business model, the company stands out for its responsiveness and attractive prices. Its first watch was financed in under a minute by a Kickstarter campaign in March 2021, created in less than a year – and amidst a pandemic at that.

In response to the announcement of the prize for the Best Young Student at the Geneva School of Watchmaking, Nathan Roux Morand came to collect his trophy rewarding many hours of hard work. Karl-Friedrich Scheufele, Co-President of Chopard, took the stage to receive the Jewellery Watch Prize and reminded the assembly of the importance of making every possible effort to perpetuate the fine crafts that represent the entire industry.

Twenty “Aiguille d’Or” Grand Prix winners and 84 finalists
After the Fabergé Museum in Saint Petersburg, the 84 watches nominated for the Grand Prix d’Horlogerie de Genève made a stopover in Geneva. On the occasion of its 20th anniversary, the GPHG brought together the 20 timepieces that have won the “Aiguille d’Or“ – the supreme distinction – since the creation of the event in 2001. “This 20th anniversary exhibition underscores the maturity of the GPHG and the continuity of its mission on behalf of watchmaking, also reflected in the recent creation of its Academy”, said Raymond Loretan during the inauguration ceremony. With 104 watches signed by more than 50 brands, the GPHG offers visitors to Geneva’s Musée Rath an extraordinary panorama of contemporary watchmaking creativity.

From November 24th to 28th, the award-winning watches will be presented at Dubai Watch Week. They will then travel to Paris where Chronext will host them from December 3rd to 5th.