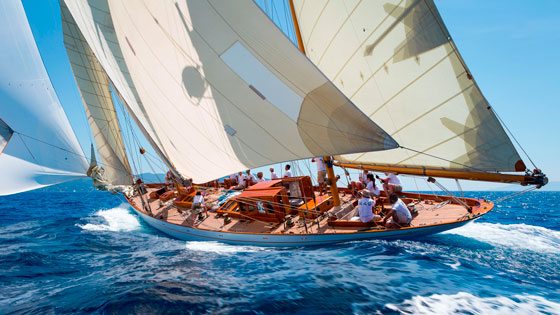 Even the most established legends have an origin story. The modern Panerai watch as it is recognised today began in 1936 with the Radiomir, an instrument devised to support marine missions and named for the material patented by Guido Panerai to illuminate dials and sights.

In a stroke of fate, a yacht that would become a part of the Panerai story was also created in 1936. Eilean, designed by preeminent boat builder William Fife III of Scotland’s Fife boatyard, sailed the seas of Europe and the Caribbean for decades before falling into disrepair in the early 21st century. Panerai acquired the yacht in 2006 to fully restore its splendour.

The watchmaker now presents the Radiomir Eilean, a timepiece that combines the heritage of these two iconic designs born in the same year. Its 45mm case, with proportions and features that have endured since the time of the first Radiomir, is composed of patinated steel with a matt finish that reflects light with a softer, warmer lustre than highly polished metal. Within the case, vintage-style golden finish hands mark the time on a signature sandwich dial featuring numerals and hour-markers in beige Super-LumiNova with a green glow, features that remain faithful to the appearance of early models.

Details that reveal the special nautical inheritance of the Radiomir Eilean are apparent from every vantage. The surface of the dial features striations and a variegated brown finish that evokes the teak deck of the yacht, while the caseback and strap bear an inscription that reads “Eilean 1936” and is identical to one located on the ship’s boom. Likewise, the dragon emblem adorning the boat’s hull was reproduced in an engraving on the left-hand side of the case.

In keeping with the Radiomir’s heritage, the Radiomir Eilean features a hand-winding movement like its ancestors. Housed in a case that is water-resistant to circa 100 metres, this calibre offers a three-day power reserve.