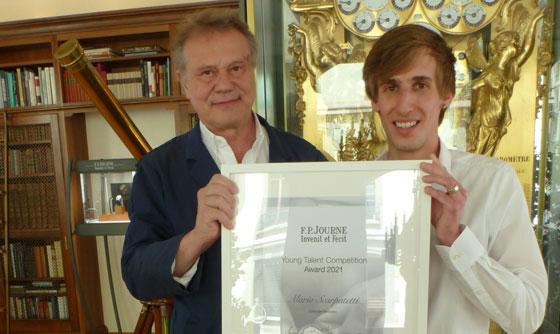 Since 2015, the Young Talent Competition allows discovering the next generation of most talented young watchmaking apprentices in the world, supports them in their route to independence by identifying their achievements and putting them under the spotlight.

F.P.Journe organizes this competition with the support of The Hour Glass, luxury watch retailer in the Asia Pacific region.

This 2021 edition was won by Mario Scarpatetti for his “Kalender Perpeten” creation featuring an ingenious mechanism with a secular calendar based on his patented invention. With the exception of the four ball bearings, all movement components are traditionally crafted. The movement consists of 478 individual parts and has a total of 570 components.

The selection criteria are based on technical achievement, the search for complexity in their realization, the quality of craftsmanship as well as their sense of design and aesthetics. Applicants must have independently designed and created a timepiece and/or technical construction. The 2021 Young Talent Competition winner receives a diploma and a CHF 20,000.- grant from The Hour Glass and F.P.Journe, which will allow him to purchase watchmaking tools or finance an horological project.