Alpina in favour of plastic recycling 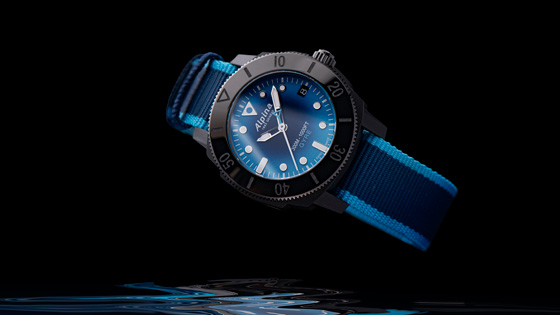 For almost 140 years, the Swiss watch manufacturer Alpina has been intimately linked to nature, the great outdoors and their respectful exploration.

In 2020, the Maison unveils its new Seastrong Diver Gyre Automatic line, made from plastic waste and thus a worthy heir to this commitment.

Technological innovation, craftsmanship and an ecological manifesto are the driving forces behind these five models launched to support World Oceans Day (on June 8th 2020). On this occasion, the Brand went even further by announcing its partnership with the start-up Gyre Watch, which is responsible for sourcing the recycled material.

While humanity is caught in a climatic whirlwind that is difficult to slow down, the same is true of the ocean, where between eight and ten million of tones of plastic waste are dumped every year. Where does it go? Mainly into ocean gyres; vast vortices formed by different sea currents and distributed across the globe. They toss our plastic waste, propelling it over huge areas and into the abyss.

Now, Alpina is harnessing the power of these gyres in a new and actively engaged range within the Seastrong collection. For the first time in the history of the brand, the Seastrong Diver Gyre Automatic range features a case comprised of 70% plastic debris derived from fishing nets collected in the Indian Ocean. To ensure its durability, it has been strengthened with 30% fibreglass.

This line as well as its name draw their inspiration from the encounter between Alpina and the watch journalist Bernard Werk, in the Netherlands, three years ago. Personally involved in the preservation of the oceans, he created the concept as well as the name “Gyre”, in reference to these giant circular ocean currents – and consisting in reusing the ghost fishing nets from the Indian Ocean. In order to protect an environment dear to Alpina and leave a sustainable footprint, the Seastrong Diver Gyre Automatic line is the beginning of a long-term collaboration between Gyre Watch and the Maison.

It is also the first time that this eco-responsible blend has complied with EU REACH legislation (Registration, Evaluation, Authorisation and Restriction of Chemicals). Its aim is to control the use of chemical substances in order to improve the protection of human health and the environment, while promoting a high level of innovation.

The Seastrong Diver Gyre Automatic range now comprises five variations, including three men’s models (44mm) and two ladies’ models (36mm). These timepieces will be made in strictly limited series of

For the launch of these new products, Alpina has chosen to support Surfrider Foundation Europe. Created in 1990, in France (Biarritz), by a group of surfers wishing to defend their playground, the Foundation bears the citizen mobilization for the protection of the ocean and the coast in its DNA. Entirely in line with these values of sharing and respect between humans and nature, Alpina has become a partner of this international non-governmental and environmental non-profit organisation, acknowledged for its ongoing daily struggle led by nearly 2,000 volunteers across 12 European countries.