Census of the watchmaking employees 2018 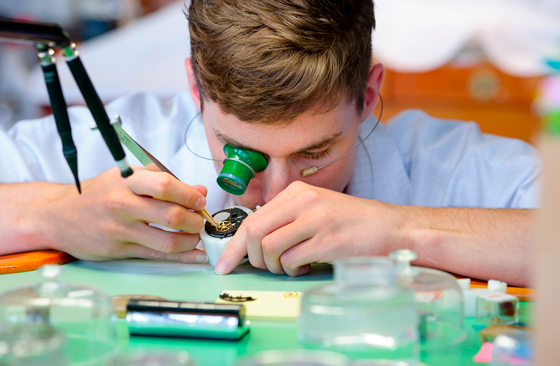 At the end of September 2018, the watch industry’s workforce stood at 57,812 workers, an increase of 2,868 jobs compared to the previous year (+5.2%). The sector has almost compensated, in terms of personnel, for the losses suffered in recent years. Despite this good result, caution should continue to be exercised.

Two-thirds of losses now made up
On September 28th 2018, there were 57,812 people working in the watch and microtechnology sector, 2,868 more than the previous year (+5.2%). This is what emerges from the annual census of the sector carried out by the Employers’ Federation of the Swiss watch industry (CP). This is the first time that the figures have risen in four years, after the loss of 4,168 units (-7.1%) between 2014 and 2017. This clear increase is consistent with the overall growth of Swiss watch exports in 2018 (+6.3%).

Growing production staff numbers
Almost all of the personnel hired were involved in production (+2,691, +7.0%), thus confirming the latter’s role as a true barometer of the sector’s industrial activity. In the other categories, there was a very slight increase in the number of executives (+152) and administrative staff (+35). The number of home-based staff fell by 10 units (-7.8%). This trend is not very significant, as only 100 people actually work at home.

The proportion of workers with a trades diploma increased by 5.7%, now representing 46.9% of the total workforce. This increase maintains the proportion of qualified personnel in the sector at a high level (68.9%).

It is difficult to predict the evolution of the watch industry’s workforce in 2019, as the low economic visibility means companies are relatively cautious when it comes to hiring.

Companies subject to the CLA in the majority
The number of companies has increased by 3.3% since the last census (694 compared to 672), mainly due to the opening of new points of sale. Among the various fields of activity, finished products account for 21.4% of turnover in the sector, and sub-contracting for 38.8%. The latter category includes companies active in the manufacture of ébauches, movements, watch components, electroplating, polishing and decoration. Almost a quarter of the companies come from sectors indirectly linked to watchmaking such as microtechnology or machine manufacturing.

Companies subject to the Collective Labour Agreement (CLA) signed with trade unions in the sector are in the majority: they represent three quarters of the total number (512 units) and employee 49,722 people. In other words, in 2018, 86.0% of employees were working in companies subject to the branch’s collective bargaining agreement (85.9% in 2017). Watchmaking is one of Switzerland’s economic sectors best covered by such labour agreements.