In 1996, Patek Philippe launched an innovative advertising campaign called Generations, which remains as topical as ever today after subtle reinterpretations over the years. In the same spirit, the firm created a magazine reserved for owners of watches made by the manufacturer.

Launched in the autumn of 1996, the Generations advertising campaign took a persuasively emotional approach, clearly distinguishing itself from conventional watch advertising in those days. It placed the accent on the staunch and steadfast relationship between the owners of a Patek Philippe and their watches. The certainty of owning an exceptional creation that embodies a magnificent cultural, artistic, and scientific legacy. The assurance of having acquired a precious object that would serve as a companion across many generations.

The campaign developed by the London-based Leagas Delaney advertising agency places the customer in the focus rather than the product. It also differed from then-customary watch advertising in two further respects. Instead of emphasizing the economic or occupational status of the target audience, it entered into the private domain and the emotional spheres that bond family members. And instead of hailing the past, it presented a dynamic, forward-looking vision which comes to the fore in the slogan "Begin your own tradition."

To visualize this innovative concept, the campaign relied on photographs that express the affectionate relationships between mothers and daughters as well as fathers and sons. Times of togetherness between the generations. Moments of learning and sharing. Four-hand piano playing, the first tie knot, the first shave, a fishing excursion for two, discoveries in sports, glances that meet – many intimate and precious occasions to which everyone can relate. They are depicted in scores of timeless black-and-white pictures accompanied by the somewhat provocative headline "You never actually own a Patek Philippe. You merely look after it for the next generation."

In the course of the years, the campaign was subtly evolved without diluting the clarity of its message or recognizability. Some photographs made it possible to showcase certain watch collections, such as maritime visuals for the Nautilus models. To accommodate the curiosity and the growing horological competence of the public, more priority was accorded to product information as well.

In two decades, the Generations campaign had a decisive impact on the realm of watch advertising. It contributed to the growing popularity of Patek Philippe, not only among connoisseurs, but also within the public at large, helping as well to appeal to younger customers. In 2007, its assertiveness and uniqueness were doubly saluted by the "Prix suisse de la campagne horlogère de l’année" (Swiss award for watch advertising of the year), once conferred by a professional jury and once by the public.

Since 2013, the Generations concept has also been at home in the digital media where online videos showcase very private moments between fathers and sons or mothers and daughters at many different locations in the world. Four new ads were released in the fall of 2016, adding new zest and freshness with photos featuring three generations.

Twenty years - roughly one generation - after its launch, this significant international Patek Philippe campaign with meanwhile nearly 50 ad themes has established itself as a role model for longevity and enjoys unique standing in the watch advertising segment, if not in advertising per se. This lasting success is due to the strong emotional statement, to its universal validity, but also to its perfect congruence with the beliefs of Patek Philippe customers and with the values of an independent family-owned manufacture that is traditionally handed down from father to son.

Patek Philippe Magazine
The idea behind the Patek Philippe Magazine launched in 1996 is credited to Philippe Stern, then the president of the manufacture. He wanted to share the cultural universe and the values upheld by the company with its customers. The publication is reserved for owners of Patek Philippe watches, addressing the main interests and lifestyles of a clientele with exquisite taste. It covers a broad spectrum of topics from fine arts and architecture, fashion, design, craftsmanship, music, film, photography, and science to travel reports, not to mention portraits of distinguished personalities of our era.

The Patek Philippe Magazine offers its readers privileged access to the world and behind the scenes of the manufacture, featuring articles about its latest debuts and technical achievements, but also about legendary timepieces, the history of individual collections, and the many skills pursued in the manufacture's ateliers - both in watchmaking and in rare handcrafts.

In the twenty years since it first appeared, the Patek Philippe Magazine has established an outstanding reputation for its appealing content and editorial quality. It has been able to benefit from the contributions of many prominent authors, among them José Saramago and Gao Xingjian, winners of the Nobel Prize in Literature, world-famous writers such as Carlos Fuentes, John Fowles and Jung Chang, as well as highly talented chroniclers including Peter York, Will Self and Nick Foulkes. The equally superb visual material has been created by eminent photographers such as Eve Arnold, Lord Snowdon, Elliot Erwitt, Don McCullin, Rene Burri, Wim Wenders, Jason Bell, Simon Norfolk, Gautier Deblonde and John Swannell. 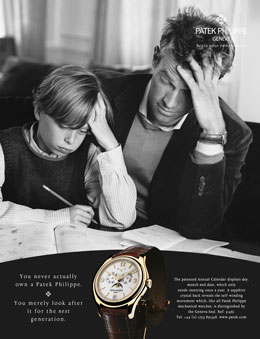