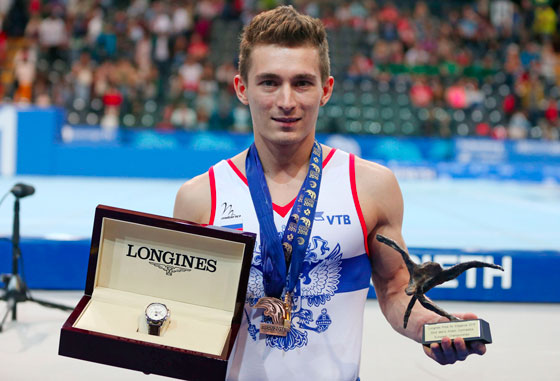 Longines is the official partner, timekeeper and watch of the Longines European Men’s and Women’s Artistic Gymnastics Championships 2016 which took place in Bern from 25 May to 5 June.

Following the apparatus finals, the brand awarded the Longines Prize for Elegance to British gymnast Rebecca Downie and Russian gymnast David Belyavskiy, who both received a Longines DolceVita watch and a Longines Master Collection watch respectively, as well as a trophy.

Longines also paid tribute to the wonderful performance of its Elegance ambassador, Giulia Steingruber, who once again demonstrated her incredible talent by winning two gold medals, in the vault and floor competitions.

Longines’ commitment to gymnastics began in 1912 when the brand presented an electromechanical timing system. For over twenty years, Longines has been the official partner and timekeeper at artistic and rhythmic gymnastics competitions organised by the International Gymnastics Federation (FIG).