Vacheron Constantin is reinforcing its international presence with the opening of its first boutique in New York City, at the corner of 729 Madison Avenue and East 64th Street.

One hundred and eighty years ago, on September 17th 1831, Jacques Barthélémy Vacheron wrote a letter stating his intention to expand business to the United States. Just one year later, the company established its first agent in New York. By mid-century, business had taken off: company archives show that in 1855 a parcel containing chronometer timepieces with a new stem winding mechanism was delivered to New York. The beauty and precision of these watches won over Americans, helping the brand to take firm root in the United States and ushering in an era of close cooperation between New York and Vacheron Constantin.

The brand continued to grow and flourish in the 20th century. In the early 1900s, its timepieces could be found on the wrists of eminent personalities such as members of the Rockefeller family, Henry and William James, and Sydney Bechet. Archival records show that customized Vacheron Constantin timepieces were ordered by notable collectors as Henry Graves and James Ward Packard, recognizing already at the time the technical expertise and craftsmanship know-how (enamelling, engraving, guilloche craft and gem-setting) of the brand. The company took part in the New York World’s Fair in 1939. Presidents Harry Truman and Dwight D. Eisenhower each owned a Vacheron Constantin, and in the late '60s and early '70s, the Geneva firm was called upon to commemorate the first US expeditions into space. Reaching an exceptional milestone in 2005, Vacheron Constantin celebrated 250 years of history around the world with gala anniversary events held in 17 global cities, including New York.

Vacheron Constantin’s deep roots in New York make it the ideal place to open the first US boutique. The location of the brand’s newest boutique is a distinct historic location: the building, built in 1908, is the work of architect William E. Mowbrayand and is reminiscent of the Palazzo Strozzi, a 15th century Florentine palace. Located on the southeast corner of Madison Avenue and 64th Street, it exemplifies the splendour of classic Italian art and expresses the brand universe in a truly exceptional location.

Three exceptional models
Three exclusive models are being introduced to celebrate the boutique opening: the Overseas Chronograph Perpetual Calendar Boutique New York, the Historiques American 1921 Boutique New York, and the Patrimony Traditionnelle calibre 2755 Boutique New York. From the Overseas whose dial bears the colors of the American flag, to the historical watch evoking the Roaring Twenties, to the one-of-a-kind Grand Complication timepiece featuring a specially engraved case, these three exceptional creations each illustrate a milestone in Vacheron Constantin’s history and represent, each in their own way, the rich and storied heritage of the brand. These special, limited edition timepieces issued to mark the inauguration of the new boutique pay vibrant tribute to the avant-garde spirit of a brand that has consistently devoted its expertise to the finest quality, unparalleled elegance, and high craftsmanship for more than 255 years. 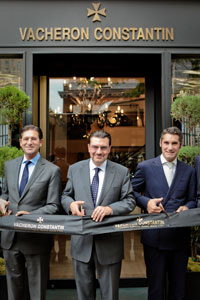 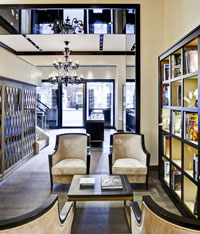 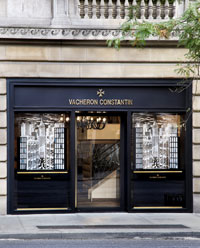 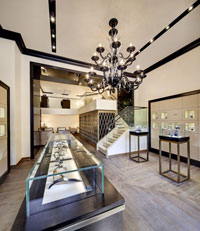