Tissot is proud to announce its partnership as the unique official timekeeper of the 15th Asian Games, to take place from 1st-15th December 2006 in Doha, Qatar.

Tissot is no stranger to the Asian Games, having been the Official Timekeeper for the last two in Busan and in Bangkok, in conjunction with its sister company Longines. As the unique official timekeeper of the 2006 event, Tissot’s timekeeping teams of some 40 technicians, working an equivalent of 1,200 men’s working days, will handle over 35 tons of material and 30 kilometers of cables as data, times and scores are processed and distributed to a watching world estimated to be on average 1.5 billion spectators in over 50 countries, with an estimated 3.0 billion viewers for the opening ceremony. Specific equipment is developed to suit each discipline, ranging from touch pads used in the swimming pool, to cycling starting blocks and sophisticated photo finish material.

François Thiébaud, President of Tissot, commenting on Tissot’s continuing support of the event, said: "Partnering with major sports events is important for us as it underlines the dynamic nature of the brand and our values of precision and performance. With over 56 world championships timed by us around the world, it is normal that we should wish to offer our support to such a prestigious event in Asia, which is a market very important to our brand. Offering this essential timekeeping facility will also give our customers and partners in the region an additional reason to be proud of their commitment to Tissot."

Yousuf Mohamed Al-Othman, Deputy Director General of the Doha Asian Games Organising Committee (on the right), commented: "We are very proud that the fame and recognition of the 15th Asian Games is attracting internationally renowned companies such as Tissot. This demonstrates the confidence of the global companies in Qatar’s capability and strong determination to hosting the Doha 2006 Games. We believe that the importance of the Games will be felt far beyond Asia and the Middle East and that this will have a very positive effect on global recognition for Doha and the state of Qatar as a centre of mega sporting events".

From their first creation in 1951 in New Delhi (India), where there were only 6 sports and 11 competing countries, the Asian Games have continued to grow in popularity and reputation to become the second biggest event in the world after the Olympics. In 2006 the Games will include the record number of 423 events from 39 sports with athletes from 45 countries taking part. The new record number of events have come from the addition of 12 Track Cycling Events (8 for men and 4 for women), a discipline very popular in Asia, as in Europe, and for which Tissot is already timekeeper for the world championships.

These games are particularly important for Asians as they incorporate not only global sporting discipline, but also specific Asian sports that have their roots based far back in Asian culture, such as Sepaktakraw (a sport recorded in the cultures of South-East Asia nations as early as the 11th century), the Korean martial art of Taikwondo (part of which origins can be traced back to a form of Chinese boxing in 520 BC), the Indian traditional game Kabaddi, and the 5,000 year old Chinese martial art disciplines of Wushu. As a global brand, present in over 150 countries around the world, Tissot is proud to be part of an event that encapsulates so much cultural diversity. 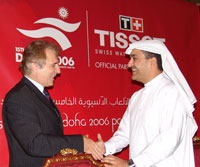