For over twenty years, Harry Connick Jr has been delighting audiences all over the world with his versatile talent and appealing personality. Born less than forty years ago in New Orleans, this show business virtuoso is an unrivalled pianist, singer, big band leader, composer and arranger and also one of the world’s most talented cinema and television actors. Hardly surprising then that Longines should be at one and the same time proud and happy that he has joined the constellation of past and present stars – from the immortal Hollywood giants Audrey Hepburn and Humphrey Bogart to the Indian star Aishwarya Rai – who are its ambassadors of elegance all over the world. The universal talent of Harry Connick Jr will be illuminating a no less universal brand whose cosmopolitan corporate philosophy means that it feels at home everywhere in the world. 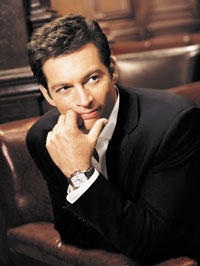