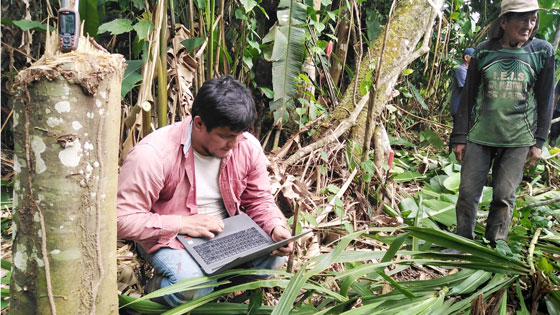 Protecting and reconstituting forests, raising awareness among youth, preserving ancestral skills: these are the main goals of the Audemars Piguet Foundation, which is celebrating its 30th anniversary this year and is currently supporting 48 projects in 28 countries.

Created in 1992 by Jacques-Louis Audemars, the Audemars Piguet Foundation is a Swiss non-profit institution whose mission is to promote worldwide forest conservation. Its actions focus on three areas: forest conservation and reconstitution, raising awareness of environmental issues among youth, and preserving ancestral knowledge related to Nature. It also acts as the spiritual “godmother” of the watchmaking company’s social responsibility, as well as helping to raise awareness of sustainable development principles among employees. The Board of the Audemars Piguet Foundation is chaired by Jasmine Audemars, daughter of the founder. It is headed by Susan Simmons Lagreau, Secretary General since 2018.

Approach
The Foundation supports projects run by not-for-profit and non-governmental organisations worldwide in order to help communities preserve a way of life and culture respectful of their environment. Its approach is to initiate a virtuous circle of sustainable development through projects conducted in collaboration with the populations they affect.

The Foundation gives priority to projects reflecting the three values of tradition, excellence and daring.

In addition, the projects must:

Audemars Piguet corporate volunteering
Since 2019, the Audemars Piguet Foundation has also been overseeing the Audemars Piguet Corporate Volunteering programme to enable each employee to make a personal contribution to civil society. Employees can donate their time and/or transfer their skills to charitable organisations during their working hours. This programme, which currently consists of a catalogue of around 20 activities per year, is currently operated in Switzerland and will be rolled out internationally from 2023 onwards among the subsidiaries of the watchmaking Maison.

Peru
In this South American country, the Foundation is backing the association Nouvelle Planete to help indigenous Amazonian peoples to secure land ownership of their territories so that they can preserve their main source of supply, as well as help protect the Amazon rainforest and the global climate balance. Carbon capture studies have recently shown that forests in the hands of indigenous peoples are those best preserved in the Amazon.

Peruvian law recognises ancestral indigenous territories and assumes responsibility for granting legal personality to their communities. The Constitution confirms and protects these indigenous rights, which are also recognised in international law by the United Nations International Labour Organization. This Convention includes the right of indigenous peoples to be consulted on state decisions that affect them, through free, prior and informed consent.

In the various Amazonian regions of Peru, there are still some 600 indigenous communities and 500 communities in riparian zones (ribereños) of indigenous origin that do not yet have land titles. Their territories are subject to constant incursions by illegal loggers and other resource extractors, against which there is no legal means of protection. As a result, their food security is affected by the deterioration of biodiversity and fish stocks in lakes and rivers. Land demarcation is the first step to empowering indigenous peoples.

The project supported by the Foundation is located in the Lower Ucayali, in the northern part of the Peruvian Amazon in Loreto, which is subject to strong pressure from timber extraction companies that take advantage of the lack of official documents attesting to the ownership of land by local communities. The communities are neither registered nor titled in the land registers. They are therefore unable to assert their rights, which are now provided for in the Peruvian Constitution.

The project aims to grant legal land titles to 44 indigenous communities in the Lower Ucayali basin and thus protect at least 200,000 hectares of Amazonian forests. The project is run in collaboration with the Centro paras el Desarollo del Indigena Amazonico in Iquitos, Peru. It also focuses on training community leaders to be fully aware of their land rights. This mission strives to support local communities and to fight against their exodus.

Vietnam
In Vietnam, as elsewhere, the protection of natural areas is often facilitated by the full and inclusive involvement of local populations, who are dependent on both natural resources and their conservation. In order to achieve goal 15 of the 2030 Agenda for Sustainable Development and to promote greater social justice and empowerment for the most vulnerable, GRET – an international solidarity organisation whose objective is to improve the living conditions of the most vulnerable populations and promote social justice, while preserving the planet – is conducting a project for the protection and inclusive management of the Pu Luong nature reserve, fostering the protection of the collective asset represented by this natural area, while improving the living conditions of ethnic minority women.

Despite positive legislative changes in recent years, Vietnamese women – and particularly those from ethnic minorities – still face discriminatory attitudes and many difficulties in their daily lives, including poverty, limited access to higher education and employment opportunities. Some of these women live in or around nature reserves such as Pu Luong (17,662 ha), located in Thanh Hoa province in north-central Vietnam. It harbours major forests undergoing ecological restoration and rich biodiversity, as well as protecting the Ma River drainage basins.

The transition from community-managed access to natural areas to strict government control increases the vulnerability and marginalisation of the poorest people. Local communities indeed have little or no agricultural land and live mainly from livestock and forest products, which account for up to 60-80% of their income. Minority women are particularly affected because men have professional opportunities outside the agricultural sector, locally or in other regions. Women, who are traditionally responsible for the livelihood of the household, are most often assigned to the home. Due to cultural norms and gender biases, they have less access to and control over natural resources. In Vietnam, about 38% of women and 62% of men hold land use certificates, so women are rarely fully involved in resource management decisions.

It is within this context that the Quan Hoa Rural Development Cooperative (DRC) and GRET launched the Pu Luong project. The aim is to improve the living conditions and economic autonomy of women from the Thai and Muong ethnic minorities and to ensure inclusive and sustainable forest management in the protected areas and buffer zones of the Pu Luong nature reserve.

In total, some 6,800 Thai and Muong women (51% of the population) living in the 31 villages in the reserve and surrounding buffer zones are being supported. Seventy people representing the local authorities and the reserve’s management authorities are likewise involved, while people visiting the reserve are also made aware of the projects.

West Africa
Palms( Arecaceae) are a very diverse family of plants with about 2,600 species in 187 genera throughout the tropics and subtropics. These species have multiple uses in all areas of life. They are used for food, traditional medicine and handicrafts. The many practical uses of palms subject them to significant pressure from anthropogenic factors.

With the exception of the oil palm and the coconut palm (intensively cultivated/domesticated), all other palm species in Ivory Coast, Ghana and Benin are not domesticated. This is the case throughout West Africa. These palms are harvested directly from the bush or forest, among natural populations. Unsustainable logging methods and the clearing of areas particularly rich in palm species (lowlands, wetlands, forests) pose a serious threat to these plants. Regeneration is unfortunately long and difficult, as germination often takes several months and plant growth is slow. Some palms take decades after germination before they can be harvested.

The Foundation is supporting a transdisciplinary project, lead by Conservatoire et Jardin botaniques de Genève, in Senegal, Ivory Coast, Benin and Ghana. Through knowledge of the extraction sectors of three groups of useful forest palms (raffias, rattans and doums), the project aims to propose sustainable agro-ecological solutions (multiplication, nurseries, domestication) for the active conservation of these species, which are often overexploited, as well as their natural environments, which are strongly threatened by deforestation and drainage.

The project aims to harness the combined efforts of local universities and botanical gardens on behalf of biodiversity conservation, as well as of harvesters, growers and artisans concerned, within a broad programme involving harvesting, cultivation and dissemination of germplasm.

Ultimately, it aims to provide farmers, associations, NGOs, botanical gardens, forestry services and managers of parks, reserves and classified forests with palm seedlings for their development operations, agroforestry, rehabilitation of degraded areas and environmental education operations. It also enables the development of germination and multiplication techniques for these palms. In addition, the Multipalms project places great emphasis on educating young people as the next generation of scientists. Thus, over the three years of this first phase, several Master’s students will be trained.

Over the past three decades, the Foundation has worked very discreetly and entirely independently from the watchmaking company. Today, it wishes to communicate more broadly on the projects it supports. It will therefore be launching a website at the end of the year in order to reveal its past and current activities.