Oris - Back to the depths 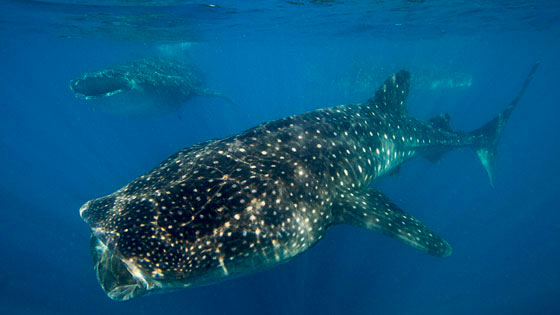 Oris’s mission to bring Change for the Better turns to the Earth’s delicate ecosystem and to the Oris Whale Shark Limited Edition, a watch that highlights the threat to the largest fish in the ocean, the magnificent whale shark.

These animals are the ocean’s gentle giants. They can grow to more than 40 feet in length and over 20 tonnes in weight, giving them proportions similar to a yellow school bus. But they’re docile and have been known to allow swimmers to grab on for a ride, like a dolphin.

They’re mainly found in tropical waters, and are known to migrate to the continental shelf off the central west coast of Australia every spring. They feed by jutting out their huge jaws and passively filtering everything in their path, consuming plankton and small fish, making them one of only three breeds to use the technique. Left to a healthy life, they can live up to 70 years.

But according to the International Union for Conservation of Nature (IUCN), the whale shark is endangered and the population is decreasing. In 2016, the IUCN made the stark announcement that the global population of whale sharks had halved over the previous 75 years.

The causes of this steep decline? The IUCN said legal and illegal fishing, entrapment in fishing gear, and collisions with boats were responsible for the most deaths. In other words, human activity is largely to blame.

What makes whale sharks so important? “As top predators, sharks play an important role in the ecosystem by keeping species below them in the food chain, and as indicators of ocean health,” says Oris ambassador and underwater photographer Gerardo del Villar, who has been documenting whale sharks for more than 15 years. “They help to eliminate the weak and sick and to maintain balance with competitors, thus guaranteeing species diversity. Without whale sharks, ecosystems will collapse in the future.”

What can be done? This is the question that drives Gerardo. “We need to create marine protected areas,” he says. “We need to educate people about the importance of whale sharks. We need to curb pollution of the sea. And we need to fight against climate change. These are all essential to the conservation of this species.”

The Oris Whale Shark Limited Edition is based on the Oris Aquis GMT diver’s watch and is limited to 2,016 pieces to mark the year of the IUCN’s landmark whale shark announcement.