Longines is celebrating 120 years of protection of its very first logo which is still in use today. That event certainly merits an exhibition at the Cité du Temps in Geneva.

This year, the company based in Saint-Imier will be celebrating the 120th anniversary of the registration of a logo which is still being used today. Protected since 1889 in Switzerland by the Federal Office for Intellectual Property (FOIP), this trade mark, consisting of a winged hourglass and the name Longines, is the oldest of its kind still in unchanged use today recorded in the international registers which are managed by the World Intellectual Property Organisation (WIPO). To mark the occasion, Walter von Känel, Chairman of Longines, held an international press conference in Geneva on 1 October attended by Brigitte Bolli Jost, head of trade mark registration in Berne, and Francis Gurry, Director-General of WIPO.

In 1867 Ernest Francillon founded the Longines factory by bringing out-workers employed by his trading office (which had been set up in 1832 by Auguste Agassiz) under one roof and introducing new manufacturing technology. At the same time he adopted the name Longines (from the local name of the site of his new factory) and chose a symbol to represent his company, the winged hourglass. This symbol has been continually used by Longines, albeit in various forms, since the company was founded to identify and characterise its products, and is still in used today.

On 27 May 1889 Ernest Francillon registered a factory mark consisting of a winged hourglass within a double circle which contained the signature EFCo (Ernest Francillon & Compagnie) and the name Longines. This mark was registered with the Swiss authority that dealt with the protection of trademarks at the time, namely the Federal Office for Intellectual Property (FOIP). For Longines the 1889 registration was the start of an important tradition of graphic and symbolic signatures. Since, for the first time, a trademark whose use and protection in its original form was to continue beyond the 20st century was legally recognised. The protection of the trademark was ensured at an international level in 1893 and makes Longines the oldest trademark still valid in its original form in the international registers of the World Intellectual Property Organisation (WIPO).

The registration of this logo was part of the industrialisation of watchmaking in Switzerland in the last third of the 19th century, in which Longines played a leading role. Initially, the trademark chosen by Longines – the winged hourglass – served to authenticate the company’s products. But it quickly became a means of fighting against counterfeiters who hoped to take advantage of the excellent reputation built up by the St. Imier watch manufacturer. Subsequently, the factory mark was used in other contexts apart from on the product itself and began to determine the visual identity of the brand. This logo, registered in 1889, has therefore been part and parcel of the development and construction of the Longines brand which, in line with its watchmaking heritage continues to use it to this day.

To highlight the background to the adoption and protection of this trade mark, Longines has organized an exhibition which will remain open at the Cité du Temps in Geneva until 1 November. Presenting both historical timepieces and original documents, this exhibition reflects on the conditions by which a brand grows to maturity, its symbolic incarnation and the creation of a watchmaking tradition. In the same vein, the Swatch Group subsidiary has published a brochure analyzing the history and challenges of the development of the Longines brand seen from the angle of the registration of the logo back in 1889 (since then, Longines has registered some ten other logos – most recently in 1974 – five of which are still protected today). The company has also created two limited series of self-winding mechanical timepieces in rose gold. Called the Longines Heritage Retrograde and numbered from 1 to 120, each of these two series (one with Roman numerals and the other with Arabic numerals) sports on the case back the logo which has been protected since 1889. 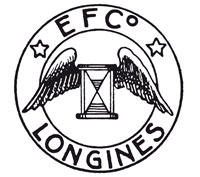 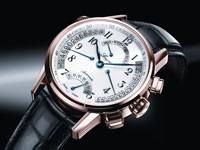 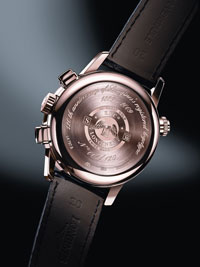 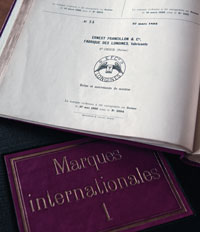