Quartz watches are extremely accurate thanks to a high frequency of vibration (32 kHz). Their annual variation is consequently very low: in the order of one minute per year, i.e. less than a second a day.

Quartz watches come with two types of display. The most common is the analogue display, i.e. with hands.

Watches with a digital display contain liquid crystals, which receive the impulses they need to display the time directly from the integrated circuit. Therefore, there is no mechanical transmission of energy.

These two types of display can be combined to provide a range of indications, such as the time of day and short, measured times, for example. 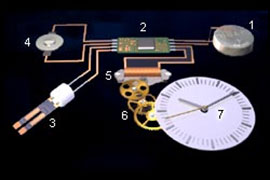 A standard mechanical watch has around 130 components assembled in three subassemblies, namely the energy source, the regulating parts and the display. The number of components is naturally higher for watches with complications (chronograph, calendar, phase of the moon, fly-back hand, etc). The energy supplied by the spring is transmitted by the gear-train. The escapement transmits impulses, while the balance divides the time. Winding, either manual or automatic via the rotor, tightens the spring. 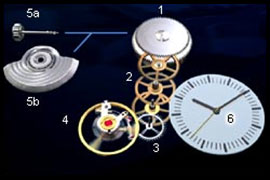 Swiss watchmakers have overcome the challenge of combining these two types of technology. They have created a watch movement which operates as a quartz movement but recharges like a mechanical movement, thereby obtaining an automatic watch with the accuracy of quartz.

Its operating principle is simple but nonetheless revolutionary: an automatic recharging mechanism (oscillating weight) tightens the mainspring which, when released, starts up a mini-generator able to convert mechanical energy into electrical energy. This energy is accumulated in a capacitor. Thereafter the system behaves like a traditional quartz watch, with the integrated circuit controlling the distribution of energy and providing the impulses required to drive the stepping motor.