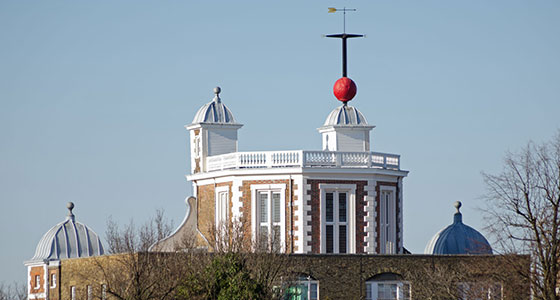 After some tough discussions, particularly between the French and the British, the Washington international conference in October 1884 adopted the Greenwich meridian as the prime meridian for measuring longitude.

Greenwich, located in the south-east suburbs of London, was until 1946 home to the Royal Observatory of the same name.

This meridian was also used to determine time-zones, and original time or GMT (Greenwich Mean Time). Since one day lasts 24 hours, the terrestrial globe is “divided” into 24 zones whose longitude differs by 15° (one hour), with the middle of each zone dictating the time in the latter. GMT is the mean solar time calculated at midday. The GMT system was adopted internationally on 1st January 1885.

However, time-zones follow national frontiers and some countries depart from universal time. China for example has adopted a single time for its entire territory, while India encompasses a time difference of five and a half hours.

On 1st January 1982, following a decision by the International Telecommunication Union (UIT), GMT was replaced by UTC (Coordinated Universal Time), in order to correct universal time, in which the duration of the day is not constant throughout the year due to the Earth’s rotation on its axis. By international convention, UTC is equivalent to GMT, however their measurements differ: GMT is measured from midday, whereas UTC is measured from midnight. UTC is the legal basis of time in the world.
UTC is itself derived from International Atomic Time (TAI) from which it differs only by a whole number of seconds, currently 32. These intercalary seconds are added at the initiative of the International Earth Rotation Service to ensure that, on average over the years, the sun is over the Greenwich meridian at 12:00:00 UTC to within nine-tenths of a second. Civil time is the time in force within a country. Around 70 countries use summer time. During certain periods of the year, generally from April to September in the northern hemisphere and from October to March in the southern hemisphere, one hour is added. Japan is the only industrialised country not to use it.

The International Date Line is on the opposite side of the Earth to the Greenwich meridian. One of the main reasons why Greenwich was chosen rather than Paris as the prime meridian was because its antipode does not traverse any land. 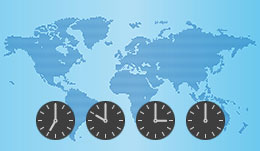