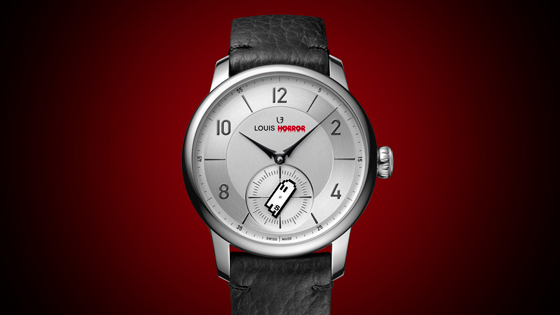 Artist seconde/seconde revisits its small seconds for the second time...

The first encounter gave rise to the “Louis Error” timepiece, while this second opus, “Louis Horror”, features a taste for revenge and an even more poltergeist vibe.

The Louis Erard Petite Seconde model has moved into another dimension. The skeleton seemed perfect for the ghoulish celebration, but the reference was too horological and too conventional for the iconoclastic designer of seconde/seconde/. It is therefore a pixelated ectoplasm which has been invited to swallow the seconds hand and which turns now and until the end of time in its dungeon-round sub-dial. A bloody touch has been left on the label, in form and in substance: Erard = Horror.

Everything else is very serious. Because there is nothing more serious in reality than appropriation. Especially when it comes to timepieces signed by Louis Erard. Especially when it comes to torturing its classic Petite Seconde model, one of the three faces of its Excellence triptych. Because under the shroud of terror shines a Swiss watch of the highest craftsmanship: automatic Sellita Calibre SW261-1, 316 L steel case, silver opaline dial with circular satin-finished zone, snailed counter at 6 o’clock with diamond-cut zone, signature fir-tree hands, glossy anthracite indexes.

Interventions by seconde/seconde/ are themselves deceptive realisations. The artist, aka Romaric André, has made his pop appropriations his trademark and beneath the amusing aspect lies very real attention to detail and quality of execution.

Louis Erard is therefore continuing its work of opening up fine watchmaking in the little boutique of horrors. The result is classic in its realisation, but contemporary in its references and in its operating mode – recalling once again the power of sharing and collaboration. Its singular way of rendering unique and creative watches accessible not only in terms of price, but also of culture, by it as popular as possible, in the noble sense of the term.

La Petite Seconde Louis Horror x seconde/seconde/ is produced in a limited edition of 178 priced at less than 2,000 Swiss francs.