A new movement by Omega 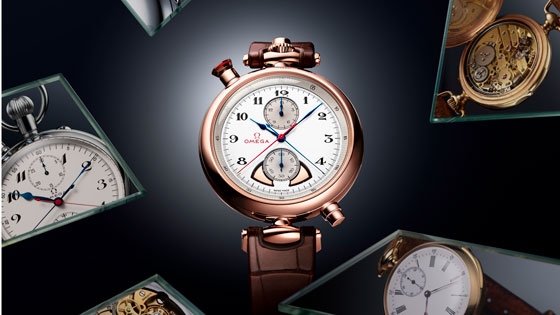 The Biel/Bienne-based company has unveiled a new wristwatch combining a minute repeater with a chronograph function, the latter inspired by the pocket chronographs used at the 1932 Los Angeles Olympic Games, the first edition of this sporting event at which Omega served as official timekeeper.

The new calibre, developed in collaboration with sister company Blancpain, took six years to complete and posed many challenges. The watchmakers had to find a way to push the limits of the famous Co-Axial escapement. Designed to operate at a relatively standard frequency of between 3 and 4 Hz, it proved to be a major constraint in the development of the new movement, which had to beat at a frequency of 5 Hz to display 1/10th of a second, similar to the pocket chronographs used in the 1932 Olympic Games. The watchmakers also had to add three strikework cams to the already complex chronograph mechanism, include two safety functions to prevent inadvertent handling mistakes and incorporate a split-seconds function. Moreover, to obtain Master Chronometer certification, the calibre must resist external magnetic fields of 15,000 gauss, which requires the use of 50 non-ferrous components. In the end, the Co-Axial Master Chronometer 1932 calibre combines the fully integrated chronograph and minute repeater functions. This new calibre required the filing of 17 patents.

This is the most complex movement Omega has ever made and it also features a remarkable satin-brushed and mirror-polished appearance. A clearly luxurious “engine”, hand-crafted and boasting 46.44 grams of gold.

This high-flying mechanism is at the heart of the Olympic 1932 Chrono Chime timepiece made of 18K Sedna gold. The gongs, also crafted from this noble material, are struck by double hammers to produce a crystal-clear sound. This timepiece features a grand feu enamel dial with a hand-crafted silver guilloché inner bezel ring and counters adorned with an exclusive “acoustic wave” pattern, an exact visual representation of the sound waves produced by the watch’s chimes.

On the dial, the central hours and minutes hands in Sedna gold are coated with blued PVD, as are the hands of the small seconds counter at 6 o’clock and the 15-minute counter at 12 o’clock. For improved legibility, the display features a central seconds hand in blued CVD and a red-coated split-seconds hand. The Arabic numerals and minutes track in black petit feu enamel are a further tribute to Calibre 1932.

Beating to the rhythm of the same calibre, Omega also offers a Speedmaster Chrono Chime, whose case is also made of Sedna gold. The dial made of blue aventurine grand feu enamel has a Sedna gold flange and counters adorned with the same “acoustic waves”.

Although the movement is the same for both watches, the functional and decorative pushers are placed differently, with the chime function at 8 o’clock and split-seconds at 2 o’clock. This model is enhanced by a Sedna gold bracelet.