Personalisation according to Jaquet Droz 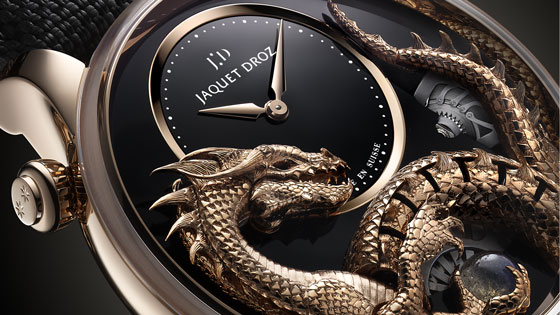 In accordance with the new Jaquet Droz Vision 8.0, the Manufacture in La Chaux-de-Fonds now exclusively produces one-of-a-kind orders for clients who are themselves unique.

It recently presented an exclusive creation in collaboration with John Howe, the artistic designer for Peter Jackson’s The Lord of the Rings and The Hobbit trilogies. This prodigious talent of the fantasy film world lives in Neuchâtel and is back in the spotlight with The Lord of the Rings: The Rings of Power, released in September 2022.

The theme of this collaboration quickly became apparent: the dragon. This reptilian creature runs through John Howe’s universe as it does millennia, cultures and continents.

Jaquet Droz wanted this Dragon to be alive. And beyond that, with a total of nine animations, it is probably one of the most complex modern automaton watches ever designed. The sequence that animates it is random, in order to preserve all its magic and mystery. The sacred animal’s spine undulates like its tail; its eye and jaw open and close; its tongue moves; its crest rises and falls; its claws grasp a continuously rotating stone.

The 43mm case is finished in the gold of your choice, and Jaquet Droz is already working on the opportunity of using other materials, such as sapphire.
The case can either be engraved or left blank. The solid dial can be fully customised, engraved or replaced by a medallion in the stone of your choice. The Dragon, also made of gold and entirely engraved by hand, can have its scales more or less accentuated. It would be futile to list all the possibilities, as they are nearly limitless.

In addition, Jaquet Droz is currently finalising a brand new phygital solution, installed right in the heart of its headquarters. Open and connected, it will enable clients to see their own Dragon Automatons being created. This immersive experience is a secret gateway to some of the richest artistic crafts in Fine Watchmaking.