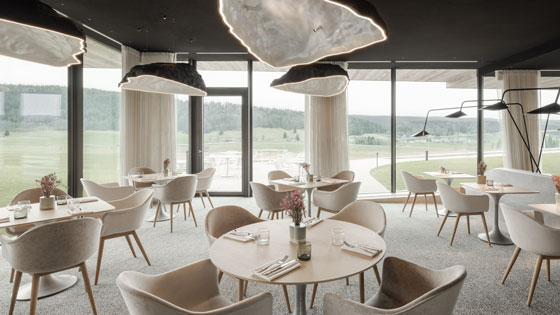 Inspired by the Vallée de Joux, the brand-new Hôtel des Horlogers has opened in Le Brassus where its predecessor, the Hôtel de France, was established in 1857.

This building with its avant-garde archtecture blends in with the topography of the landscape and is a meeting place for all watchmaking and nature enthusiasts, whether from the region or the four corners of the world.

Thanks to an avant-garde, transparent concept, visitors are immediately immersed in the natural environment of the Vallée de Joux, one of the cradles of Swiss complicated watches. Having fallen in love with the Risoud Forest, which borders the Valley, Bjarke Ingels conceived the hotel so that all the rooms would offer a breath-taking view of the region. Departing from the usual codes of hotel architecture, the building consists of slabs descending towards the valley and tilting slightly to embrace the topography while creating a continuous path in nature. BIG’s concept interprets the site as a series of mountain ridges running down the hill, while the building blocks form a series of berms lined with varied trees and plants.

Inside, the simple lines and refined language of the contemporary lobby contrasts with the more sinuous and rustic architectural elements that visitors can admire as they progress through the building. An interior passageway follows the hotel’s atypical zigzagging structure and connects the 50 rooms, varying in type from the Valley Guest Room to the Signature Suite. The hotel also encompasses two restaurants and a bar open to all, a wellness centre as well as two seminar rooms. Imagined as a meeting point for local inhabitants, tourists in search of preserved green spaces, watch and architecture enthusiasts as well as local watchmaking brands, the Hôtel des Horlogers invites visitors to take their time and connect with nature.

This feat of architecture follows in the footsteps of the Musée Atelier Audemars Piguet’s glass spiral also designed by BIG. Located a few steps away from the hotel, this ultra-contemporary pavilion was inaugurated in 2020 and awarded 9 prizes, including the Best Architecture Award by the American Institute of Architects (AIA) on 12 January 2021.

Inspired by the landscape of the Vallée de Joux
To build and arrange the hotel’s 8,715 square-metre surface, BIG worked in collaboration with CCHE, the appointed local architect and general planner which was also involved in the construction of the Musée Atelier Audemars Piguet, as well as AUM, the interior design architect. Made of local materials such as stone and wood, the interior design immerses visitors in the Vallée de Joux’s natural environment, while blending quality, comfort and conviviality.

The ceiling of the lobby boasts imposing white trees giving the impression that the forest reflects on the Lac de Joux. The rooms’ décor is for its part welcoming and refined, interweaving local spruce surfaces, large bay windows and smooth concrete for a contemporary touch.

First, the Bar des Horlogers pays tribute to the Vallée de Joux’s inhabitants. Its small local à la carte menu and its signature cocktails made from plants from the Risoud Forest can be enjoyed throughout the week in a relaxing atmosphere.

Le Gogant – in local dialect, the term “Gogant” refers to an often isolated white fir tree –, which welcomes up to 80 people, presents a refined extensive menu with affordable prices, served throughout the week, at lunch and dinner. The restaurant’s large bay windows open onto both the meadows and the kitchen for a unique dining experience in a décor inspired by the Vallée de Joux. It is open to all, 365 days a year.

Lastly, behind Le Gogant, an intimate space hosts La Table des Horlogers. This gourmet restaurant can gather up to 12 guests around a single table designed to provide a convivial experience. A tasting menu is served every day for a unique exploration of the senses.

A place in sync with its environment
The Hôtel des Horlogers’ zigzagging architecture descending towards the surrounding meadows seamlessly integrates into the Vallée de Joux’s pastoral landscape. The hotel’s sustainable commitments can be seen in the careful selection of eco-friendly materials, in the strict soil protection and in its low-energy consumption. This holistic eco-friendly approach has enabled the Hôtel des Horlogers to obtain the Minergie-ECO certification based on its energy efficiency and building ecology.

The hotel’s hot water and heating system are supplied by the remote local wood-based heating network Le Brassus Bois which offers a fully local and sustainable solution, while 126 photovoltaic panels provide part of the energy needed for the establishment. Furthermore, water sourced in Le Brassus is bottled on site to drastically reduce grey energy linked to transportation, while organic waste is transformed into biomass via a Meiko Green Waste Solutions system before being converted into electricity and heat.

In addition, the hotel aims to be plastic free thanks to the implementation of numerous alternatives to the use of this component. Single-use items, for instance, are packaged in biodegradable containers. All cosmetics provided in the rooms are fully traceable and supplied in eco-friendly dispensers, thus reducing waste by 67% and minimising the hotel’s environmental impact. The hotel team has also opted for hessian bags, wooden combs, fully biodegradable slippers and even pencils containing thyme seeds instead of the usual pens.

Lastly, the hotel’s two car parks, which feature 24 underground and 50 outdoor spaces, are equipped with 10 charging stations for e-cars and 10 for e-bikes.

A proximity approach
The Hôtel des Horlogers’ sustainable approach encompasses local partnerships so as to reduce its carbon footprint, support local communities and participate in the region’s economy. The guests enjoying a relaxing moment at the Spa will benefit from 100% Swiss products, developed by the Swiss brand Alpeor, made with plants and flowers native to the Vallée de Joux and to the neighbouring Valais region.

Local produce, which represents 70% of the hotel’s menus, will notably be honoured with a selection of regional wines and spirits, as well as locally brewed Swiss beers. In addition, the hotel has its own fruit and vegetable garden which covers part of the restaurants’ fruit, vegetable and herb supply. It also relies on fresh produce and other ingredients supplied by local producers.

For raw materials that are inevitably imported, such as tea and coffee, the hotel supports organic productions in the countries of origin. The coffee is then roasted in the Vallée de Joux and provided in biodegradable capsules.

At the heart of the age-old horological savoir-faire
To promote the unique heritage and know-how that developed in the Vallée de Joux, the Hôtel des Horlogers offers several watchmaking packages combining a night at the hotel with one or several visits of prestigious horological landmarks such as the Espace Horloger, private workshops, the Manufacture Jaeger-LeCoultre and the AstroVal observatory. Among these packages, the Hôtel des Horlogers provides a limited number of tickets for one of the guided tours of the Musée Atelier Audemars Piguet which is connected to the hotel by a didactic watchmaking path. The guided visit will introduce visitors to Audemars Piguet’s rich cultural heritage through a display of some 300 timepieces spanning over 150 years of history. Architecture lovers will also be able to admire the inside of the extraordinary glass pavilion designed by BIG.

A historical destination of local and international encounters
The Hôtel des Horlogers builds on the history of the Hôtel de France, which was established in Le Brassus in 1857 and welcomed international visitors to the Vallée de Joux for over a century. The hotel became an important stop on the Chemin des Horlogers – the watchmaking route that connected the Vallée de Joux workshops to Geneva, where timepieces were sold by retailers. It was rebuilt in 1984 before welcoming numerous visitors till its closure in the year 2000.

In 2003, Audemars Piguet purchased and refurbished this local historical landmark, which opened its doors to a new generation of visitors in 2005 under the name of the Hôtel des Horlogers. Then, willing to embark on a project more in line with the brand’s values and evolving ecological norms, Audemars Piguet closed the hotel in 2016 to better rethink its conception. The first stone of the new project was laid on 4 June 2018 and a few months later, it was awarded the Leisure Led Development Future Project Award at the World Architecture Festival.

After four years of work, the Hôtel des Horlogers is now ready to follow in its predecessors’ footsteps and welcome its new visitors to the Vallée de Joux.