A look back at the twentieth edition of the EPHJ 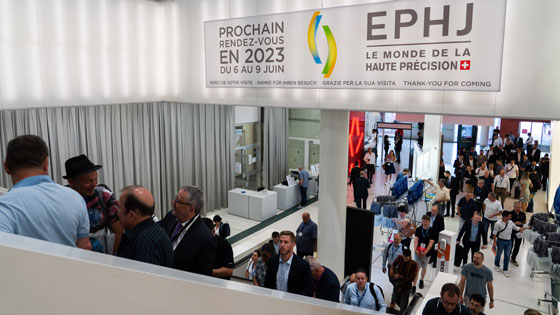 The EPHJ, the only one of its kind in the world, saw an increase in attendance for its 20th edition. 18,000 visitors walked the aisles of the show, which attracted more than 700 exhibitors.

This year’s event was dedicated to innovation, employment and youth, with the updating of a survey conducted among young people in Switzerland.

The anniversary edition of Switzerland’s most important trade fair was held from 14 to 17 June this year at Palexpo-Geneva. The only one of its kind in the world, EPHJ saw an increase in participation compared to the 2021 edition, with over 700 exhibitors. 18,000 Swiss and international visitors passed through the gates of Palexpo, which is an increase of more than 33% over 2021.

Twenty years ago, André Colard and Olivier Saenger launched the EPHJ show for the high-precision industry featuring professionals from the world of watchmaking, jewellery, micro-technologies and medtech, the aiming being to take subcontracting out of its secondary role in major watchmaking fairs and offer it a showcase worthy of remarkable know-how in watchmaking and jewellery.

Since the 92 exhibitors of this initial edition in 2002, EPHJ has continued to develop with the quiet, humble and innovative force that characterises the players of this industrial sector by building synergies with the machine industry and medtech. Today, EPHJ has become a unique event in the world, a leader in international high precision with an average of 800 exhibitors and 20,000 professional visitors.

In September 2021, EPHJ was the first trade show to reopen its doors in Switzerland after the pandemic. A bold risk hailed by the high-precision players who responded in large numbers and by the visitors whose quality and qualification were recognised by 98% of exhibitors according to the satisfaction survey carried out at the end of this 2021 edition.

Medical diversification on the rise
Just nine months after the last edition, the 20th EPHJ Trade Show shows an increase of 30% compared to September 2021, i.e. a total of 701 exhibitors. The easing observed on international travel is confirmed with14 countries represented among the exhibitors, including the United States.

The majority of exhibitors remains Swiss (78%) followed by the French (12%), Germans (4%) and Italians (2.3%). Neuchâtel still dominates the ranking of the 22 cantons represented according to the following Top 5: Neuchâtel (139 companies), Bern (105), Jura (80), Geneva (66) and Vaud (63). 67% of the Swiss exhibitors are from French-speaking Switzerland while 33% represent German-speaking Switzerland and Ticino.

Demonstrating the multi-sectoral development of the companies present in 2022, while 90% of exhibitors displayed a watchmaking or jewellery activity, 54% declared an activity in micro-technologies, in particular the machinery industry. But the most remarkable fact this year was that, for the first time in EPHJ history, the majority of exhibitors (51%) declared an activity in the medical field. A trend that clearly demonstrates the ability of the watch and micro-technology industry to bring their skills to the medical equipment sector.

A Job Dating day to combat labour shortage
Faced with the shortage of labour in the high-precision market and ever-increasing recruitment times, EPHJ organised a Job Dating day in partnership with JobWatch, which mobilised its vast network of candidates around 250 job offers from exhibitors. Candidates, future graduates or future apprentices therefore had the opportunity to meet business leaders during this special day.

The favourite brand of young Swiss has changed
Six years after the first phase, EPHJ again questioned young Swiss people, via a national survey of 16-25 year-olds, so as to better understand their aspirations, their relationships, their consumption and their perception of watches, their universe and the “Swiss made” label. This survey indicated that classic watches remain popular among young people despite the rise of connected watches, as illustrated by the fact that Apple now holds third place among the watches worn by young people.

Rolex is also experiencing a significant rise in terms of reputation and preference, becoming the favourite brand of young Swiss people six years after Swatch earned that rank six years ago. The famous Swiss watch house welcomes this recognition: “Rolex is delighted with the results of the EPHJ survey, which places the brand at the top of the aspirations of young Swiss people. We have always been keen to share our attachment to our values of excellence, particularly with younger generations. For us, this is one more encouragement to persevere on the path of excellence and the search for perfection in the service of the greatest number. It is a strong recognition of Swiss made mechanical watches, manufactured with all the quality requirements and a major concern for durability.”

The jungle of ESG certifications and medtechs in debate
Other highlights included the famous roundtables, which addressed hot industry topics every day, such as the need for more clarity in the jungle of ESG/CSR certifications and other labels, innovation opportunities for high precision, the current trend of Swiss watchmaking to develop mainly towards the high-end, medtech prototyping and the labour shortage.

Exhibitors’ Grand Prix
Praised by its peers, the German company Polycrystal design won the 2022 Exhibitors’ Grand Prix with a clear lead over its competitors thanks to a remarkable innovation in materials. STS, the defending champion, passed the trophy on to its successor, wishing it the same success that followed its victory in 2021.

Ironically, 20 years after a German company was the first to register at the launch of the EPHJ in 2002, it is another German company that was taking the honours by winning the 2022 Exhibitors’ Grand Prix for an innovation that will make a name for itself with a new high-tech material: transparent ceramics.

Transparent ceramics are manufactured from high-purity raw materials using a sintering process. In contrast to conventional technical ceramics, the material is 100% compacted so that no pores remain. Among the many advantages of transparent ceramics are the inexpensive and fast production of prototypes compared to injection moulding, environmentally friendly technology by avoiding waste and relatively low sintering temperatures.