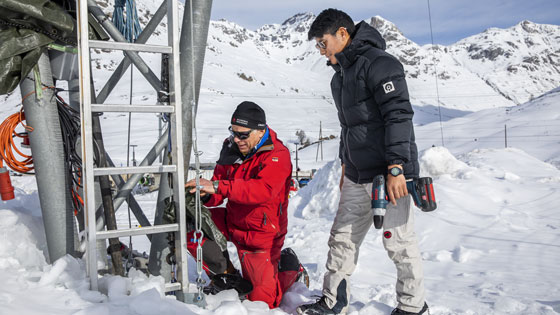 Keen to preserve Switzerland’s natural heritage as well to raise public awareness of the direct and measurable impacts of climate change on ecosystems, the watchmaker has decided to support the Ice Stupa project.

The Ice Stupa is an ongoing project developed in collaboration between the University of HIAL in Ladakh and the Academia Engedinia in Samedan via the Swiss association Glaciers Alive since 2016. Originally conceived by Indian engineer Sonam Wangchuck to preserve glacier water for villages and people in the Himalayas, the Ice Stupa is an artificially created ice cone to collect meltwater from a thawing glacier. This water is then stored until the summer, where it can be used for agriculture.

On the Swiss front, the project is led by Professor Felix Keller, supported by a team of Swiss and Ladakhi glaciologists. Professor Keller and his team have invented systems to improve the efficiency and performance of the Ice Stupa in the Himalayas using their experience with the Ice Stupa in the Swiss Alps. To pass on these latest developments to their counterpart in the Himalayas, Professor Keller invited two students from Ladakh to train them in this new water harvesting system and glacier grafting technique.

The Swiss Ice Stupa has been built on the Morteratsch glacier, specifically in the Diavolezza ski station, where students were able to test new methods and improvements to the inventions, as well as to raise awareness among tourists as well as locals about the direct environmental impact of climate change and how we might mitigate them through innovation and collaboration across borders.