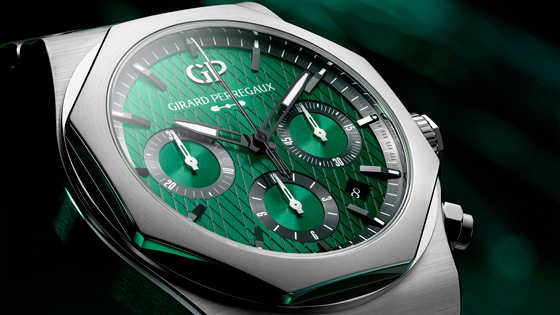 Girard-Perregaux has revealed the Laureato Chronograph Aston Martin Edition, the first results of its collaboration with the British racing team.

Back in the early 1900s, various colours were assigned to racing cars to distinguish the different nationalities of the teams. As a result, French cars were presented in blue, Italian were famously red, Belgian were yellow, German were silver, and British were dressed in British Racing Green. The British brand naturally adopted green as its racing colour with the most famous example being the Aston Martin DBR1 that won the 24 Hours of Le Mans in 1959. From that car to the modern day Formula 1 car, the stable’s racing colour has remained green.

This new timepiece is the latest creation from Girard-Perregaux, made in collaboration with Aston Martin Lagonda. Its dial is suffused with a delightfully decadent application of what is now known as “Aston Martin Green”, achieved by painstakingly applying paint 21 times to the dial, forming seven distinct layers as a result. The automotive influences also encompass cross-hatching, a diamond-like pattern first seen with the carmaker’s “AM” logo (1921-1926). This motif was also inspired by the quilted seats found in the British brand’s numerous high-performance sports cars.

Three counters grace the dial, two chronograph registers and a small seconds display. Each counter features a partially openworked hand, perpetuating the design of the hour and minute hands. The central section of each counter is snailed. A date display is positioned at 04:30, completing the inventory of functions.