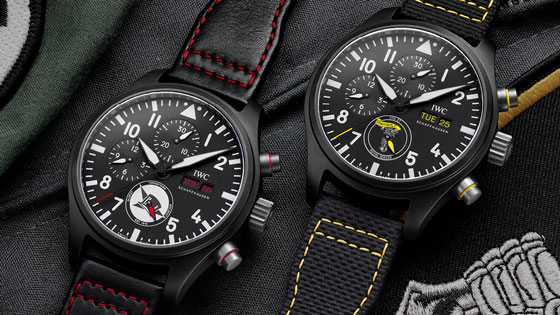 Ever since IWC Schaffhausen engineered the first Pilot’s Watch 85 years ago, the company has fostered an in-depth dialogue with pilots to precisely understand their specific needs and requirements.

This exchange has been particularly crucial for developing the brand’s mil-spec service watches, like the Mark 11 for the British Royal Air Force. Today, IWC continues this dialogue within the framework of its military program, which emerged from the brand’s partnership with the U.S. Navy.

Since 2018, IWC is licensed to work on watches for the entire U.S. Navy and Marine Corps aviation units, including the Blue Angels as well as the 247 active and 100 inactive squadrons. IWC has since collaborated with more than a dozen squadrons to create special editions that are exclusively available to present and former members.

The Manufacture is now releasing three new chronographs in its Pilot’s Watches collection, which are directly inspired by the brand’s collaborations with U.S. Navy squadrons, marking the first time these designs are available to non-pilots. The annual production of these chronographs will be limited to 500 units each.

Strike Fighter Squadron 27, known as the “Royal Maces”, is stationed at Marine Corps Air Station Iwakuni in Japan and forms part of Carrier Air Wing 5. The Pilot’s Watch Chronograph Edition “Royal Maces” is inspired by the military-exclusive edition IWC has developed with members of the squadron. The chronograph features a black zirconium oxide ceramic case, while the pushers and crown are made of Ceratanium.

Naval Air Station Lemoore in California is the home base of The Strike Fighter Squadron 14, nicknamed “Tophatters”. Formed in 1919, VFA-14 is the Navy’s oldest active squadron. The Pilot’s Watch Chronograph Edition “Tophatters” (Ref. IW389108) has a case made of black zirconium oxide ceramic.

Established in 1946, the “Blue Angels” U.S. Navy Flight Demonstration Squadron is currently made up of 141 members from the Navy and Marines. The Pilot’s Watch Chronograph Edition “Blue Angels” is the third timepiece to emerge from IWC’s license agreement, inspired by the military-exclusive watch developed with Blue Angels members.