An unprecedented year for the Swatch Group 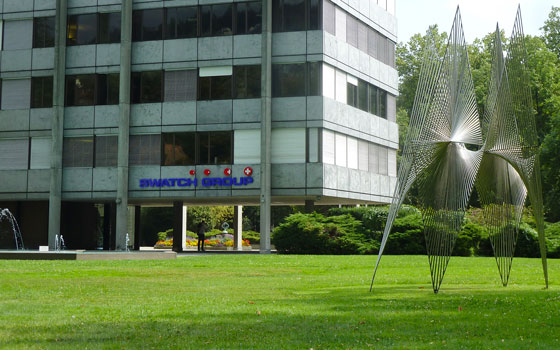 As a result of the Covid-19 pandemic, the group posted a net loss of CHF -53 million for the first time in its history.

Even the 70% expansion in e-commerce was not able to compensate for the drop in traditional retail sales. Management nonetheless remains confident for 2021.

Greatly improved second half of 2020
The Group massively increased sales in the second half of the year compared to the first half, despite state-imposed Covid-19 measures and interim lockdowns in many countries. Many retail stores had to stay closed over long periods. Especially stores run by the Swatch Group in airports and at travel destinations are still suffering considerably from the lack of tourists. In local currencies, Group net sales were -14.3% below the second half of 2019, while in the first half, a minus of -43.4% was reported.

Mainland China posted double-digit sales growth not only for the second half but also for the full year. USA was at previous-year level in December. The Tissot brand achieved the best monthly sales in its history in the USA in December, even without the T-Touch Connect Solar, which will only be launched in the USA in early 2021.

In the second half of the year 2020, the operating margin of 11.2% was slightly below the previous year’s 11.4%, mainly due to low-capacity utilization in some instances in certain areas of production.

The Watches & Jewelry segment (excluding Production) increased its operating margin in the second half of the year 2020 to 17.8% (14.8% in 2019). Without the business unit Calvin Klein and special costs in connection with the closure of retail stores, the operating margin amounted to 19.3%.

The Production sector reduced losses compared to the first half of 2020. The situation in the Production sector varied widely in the second half of the year. Some areas which mainly produced for third parties continued to report below-average capacity utilization. In other areas, demand exceeded production capacities, which lead to bottlenecks, for example, in production for Blancpain, Omega, Longines and Tissot. In addition, Omega suffered a 10-day production interruption due to a cyber attack, which led to delivery delays and lost sales. Order book in the production sector almost reached the previous year’s level (-4%) at the end of 2020.

In the year under review, the Group closed 384 retail stores. The resulting one-time special costs incurred amounted to CHF 42 million. In Hong Kong alone, the number of stores was reduced from 92 in the previous year to 38 at the end of 2020. Conversely, the brands opened 55 new stores in growth markets. Further expansion of e-commerce business, which reported sales growth of 70%, could not compensate for sales losses in traditional retail. The proportion of e-commerce for brands in the middle and basic price segment reached between 20% and 30%. Production of watches, jewelry and components was gradually increased in the past months, but will only reach capacity again in the first half of 2021.

Net sales in the Electronic Systems segment decreased slightly in local currencies by -3.1%. The operating loss amounted to CHF -6 million. Excluding Swiss Timing, whose activities for sporting events were, for the most part, either cancelled or postponed due to Covid-19, would have resulted in an operating profit of CHF 2 million. In December, there was a double-digit increase in segment sales (without Swiss Timing) over the previous year.

Personnel
As a result of closures of retail stores, the situation in Hong Kong, and reduction of Calvin Klein activity, the workforce decreased by -10.2% compared with the previous year, to 32,400 persons.

Dividend proposal
Thanks to the strong operating cash flow of the second half, the Board of Directors of the Swatch Group will propose a dividend of CHF 3.50 per bearer share and CHF 0.70 per registered share at the Annual General Meeting on 11 May 2021.

Outlook 2021
Group Management anticipates a strong catch-up in consumption worldwide for watches and jewelry in 2021, as has already been observed in Mainland China after normalization of the health situation. Demand will strengthen further as soon as travel restrictions can be relaxed or lifted.

Numerous new products from the Group’s brands will be additional sales drivers for 2021, for example, the Omega Moonwatch, the Longines Spirit and the extremely popular Tissot T-Touch Connect Solar. The latter will be launched in additional markets in 2021, including the USA and China. Swatch is pleased with the high demand for its SwatchPAY! models with credit card function. In future, these models can be conveniently configured online – unique in the world – and tokenization on site at a Swatch Store will no longer be necessary.

Highlights in Production will be the startup of a new production line for solar watch dials as well as the introduction of new technologies in the polishing sector.