The twenty years of the Résonance F.P. Journe 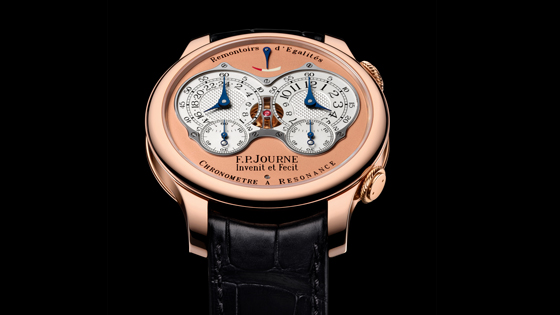 The first observations pertaining to the natural resonance phenomenon were made by 17th century Dutch scientist Christiaan Huygens, followed by 18th century horologists Antide Janvier and Abraham-Louis Breguet, who developed timepieces based upon this principle.

Since then, François-Paul Journe is the first and only watchmaker to manufacture wristwatches that perform through acoustic resonance.

When he presented his first watch to feature this attribute in 2000, he christened it Résonance and also registered the Résonance trademark for what was previously known as the double pendulum or double balance principle. The F.P. Journe Chronomètre à Résonance is the only wristwatch in the world that utilises the natural phenomenon of physical resonance without any mechanical transmission.

Conceived, developed and built to meet the demands of actual wear on the wrist and thereby provide chronometric performance driven to extremes, this watch represents one of the wildest challenges in the field of mechanical watches! Each of the two balances alternately serves as exciter and resonator. When the two balances are in movement, they enter into harmony thanks to the resonance phenomenon and begin to beat naturally in opposition. The two balances then support each other, giving more inertia to their movement. This result is possible only if the difference of the frequency from one to the other does not exceed five seconds per day cumulated on six positions. Their setting is an extremely delicate task.

Whereas an external disturbance affects the running of a traditional mechanical watch, the same disturbance, for the Chronomètre à Résonance, produces an effect that accelerates one of the balances as much as it slows down the other. Little by little, the two balances come back towards each other to find their point of harmony, thus eliminating the disturbance, and beating in perfect synchronisation.

This emblematic watch that distinctively embodies François-Paul Journe’s horological research on precision was awarded the Complication Watch Prize at the Grand Prix d’Horlogerie de Genève in 2010.

The new Chronomètre à Résonance has only one barrel spring to provide power for the two movements. A differential placed on the first wheel, visible in the centre of the dial, independently transmits the energy of the barrel spring to the two secondary gear trains. Each secondary gear train is equipped with a remontoir d’égalité with a one-second frequency. Working in such a way, the force received by the escapements remains linear and assures isochronism throughout 28 hours.