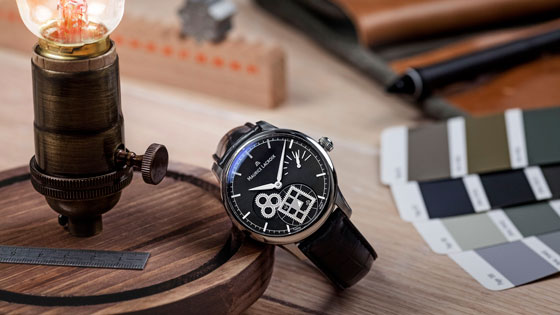 During its 40 years of existence, the House of Saignelégier has won some 15 prizes, including several dedicated it its Masterpiece collection.

This family of timepieces with complications was launched in 1992 with the presentation of the Five Hands models, featuring a novel display of calendar indications.

Maurice Lacroix was founded in 1975 during a period when electronic watches were becoming increasingly popular. The Jura-based brand was established in the midst of the quartz crisis when the demand for conventional mechanical watches was waning. However, in 1983-84, Maurice Lacroix started to acquire rare, historical mechanical movements, the production of which had long since halted. These calibres, horological gems from the golden age of watchmaking, were subsequently restored to their former glory. In 1992, the Cinq aiguilles timepiece was introduced. This watch was unique, courtesy of its five co-axially mounted hands. It was the first watch to bear the name, Masterpiece, establishing a brand name which would go onto grace some truly innovative timepieces.

During this era, Maurice Lacroix was a trailblazer, championing accessible complications when such watches were rare. The models carrying the “Masterpiece” name possessed their own unique style and complications which stood out from the crowd. Moreover, the brand embraced the best standards when it came to finishing movement parts and cases. This strategy paved the way for offering beautiful mechanical timepieces at affordable prices.

A unique path
By the end of the 1990s, Maurice Lacroix focused on making a range of Manufacture timepieces, featuring proprietary and exclusive complications. The strategy consisted of creating exclusive complication modules affixed to premium quality mechanical movements, allowing the Masterpiece collection to forge its own, unique path. Indeed, it was this approach which led to the creation of original moon phases, exceptional retrograde and double retrograde indications, all of which were highly unusual for the time. The company even created a visually striking skeleton watch. These watches would go on to become signature products, created to be visually impactful and not conforming to the mechanical norms of the time.

In 2006, Maurice Lacroix took a bold step, creating the first calibre designed and built within its historic Manufacture, in the town of Saignelégier. Developed under the codename Chronograph ML106, this movement paved the way for more than 15 calibers, hand-wound or automatic, with or without complications, but always exclusive.

Above and beyond
After embracing innovation while still respecting Swiss watchmaking traditions, the progressive brand, Maurice Lacroix, chose to “think outside the box”. It decided to offer new ways of imparting the time, employing playful and original design. Such watches continue to have no equivalent, embodying the ability to surprise, a trait synonymous with the Maurice Lacroix name. “Masterpiece” watches have become known for individual displays which remain highly legible.

They use gear systems that are surprising, such as the Square Wheel presented in 2010; or invisible and intriguing with the Mysterious Seconds in 2013, which fascinates with its linear horizontal or vertical read-off seconds display featuring 15-second increments. In 2014, the principles of watchmaking were reversed at the heart of the Gravity calibre, which reveals its silicon regulating organ. In 2020, the collection welcomes a first feminine timepiece, the Masterpiece Embrace, mingling artistic expression and technical innovation thanks to its retrograde calendar and atypical small seconds display. By regularly pushing back its limits on the Masterpiece, Maurice Lacroix has raised its watchmaking expertise to new heights. The experience thus acquired by its watchmakers is reflected in all the brand’s collections.

The future
Today, the spirit of the Masterpiece collection is very much alive. Timepieces such as the 2017 Double Retrograde and the Masterpiece Skeleton uphold the brand’s reputation for mechanical excellence. They deliver horological specialities by combining premium value with high-quality manufacturing and finishing, delivered at an affordable price, making them accessible to a broad section of society.

“Success is a journey, not a destination” says a lot about Maurice Lacroix. It embodies a culture which seeks to delight and thrill, not merely fulfil a need. The Jura-based brand has always exceeded the expectations of watch collectors and continues to do so. Owning a Maurice Lacroix Masterpiece is not an end, but a step in the life of a collector, a person who appreciates a well-made mechanical watch offered at an affordable price. The brand’s “Your Time is Now” strapline is a fitting statement, reminding us all that the moments of intense, personal pleasure that come with owning a Maurice Lacroix Masterpiece are within everyone’s reach.