More than a century of history for Hamilton 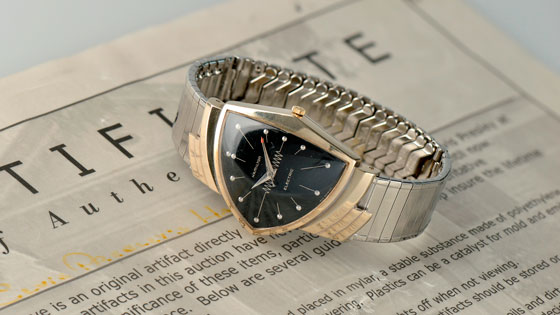 Pioneers of innovation, the brand has been creating and revolutionising the watchmaking industry since 1892.

The reputation of its high-precision watches dates back more than a century, when they contributed to the synchronisation of the first American railroads. Since then, Hamilton has never ceased to innovate.

While Hamilton took its first steps in synchronising transportation with the railways, it soon had the opportunity to put its experience with a new mode of travel to good use. Indeed, the pioneers of aviation did not hesitate to rely on the watchmaking company, known for its unparalleled precision and which had the honour of timing the first airmail in the United States in 1918. Throughout the 20th century, the company continued to design watches for pilots all over the world. The recently launched Khaki Pilot Pioneer revisits a timepiece created for Britain’s Royal Air Force in the 1970s. Today, as in the past, the brand seeks to offer its customers the best “co-pilot” for their next missions.

Thanks to its reputation for precision, Hamilton was commissioned to produce one million watches for the US Army during World War II, a military legacy that is still reflected in the design of its Khaki Field collections. Hamilton’s solution-oriented attitude has enabled it to make a name for itself in the field of cinema, where famous filmmakers such as Stanley Kubrick and Christopher Nolan have asked it to create custom watches. In all, its creations have appeared in more than 500 films worldwide since 1932.

In 1957 Hamilton created one of the most revolutionary watches ever made: the world’s first electric wristwatch, the Ventura, the ancestor of all quartz watches. Futuristic and unique, Elvis Presley owned many models after famously wearing one in the movie Blue Hawaii. Its iconic design continues to be a favourite for customers looking for a unique and daring timepiece.

A decade or so later, Hamilton disrupted the watch industry again when, in 1969, it was one of three brands to co-develop the world’s first automatic chronograph movement. This technological breakthrough would change watchmaking forever. Characteristic designs from this era can still be found today, such as the Intra-Matic Automatic Chronograph.

Another critical advancement would happen just one year later when Hamilton announced the groundbreaking Pulsar, the very first digital electronic wristwatch. An epitome of cool and worn by many celebrities at the time such as Keith Richards, Elton John or Joe Frazier, the Pulsar was the watch that changed the way we tell time.

Commitment to innovation is still vital to the brand in the 21st century. Since 2011, Hamilton has co-developed with movement-maker ETA over 15 calibres with extended power reserves and other superior features tailored to the specific demands of its timepieces. In 2020, a selection of watches will be equipped with the revolutionary new hairspring alloy Nivachron, optimising watch movements’ resistance to magnetic fields.

Historical
Hamilton was founded in 1892 in Lancaster, Pennsylvania (USA). Its watches combine the American spirit with the unrivalled precision of the latest Swiss movements and technologies. Known for its innovative design, Hamilton has a strong foothold in Hollywood, with products appearing in more than 500 films. The brand also boasts a strong aviation heritage. Hamilton is a member of the Swatch Group, the largest watch manufacturer and distributor in the world.