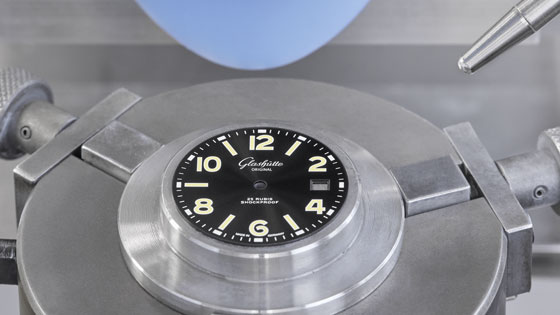 One of the rare Manufactures to have its own dial production, Glashütte Original shares details of the creation of this element representing the true face of the watch. The new SeaQ diving collection features dials with special design requirements, where legibility is paramount.

Discussions about the making of highly refined mechanical watches usually begin with a description of the sometimes extraordinary complications and sophisticated decorative finishing of the movement. Equally important, however, and no less elaborate, is the manufacture of exquisite dials – since they represent, after all, the face of a watch. As striking as they are, they are the first to catch the viewer’s eye, and are doubtless the reason for many a purchasing decision. Glashütte Original is one of the very few watchmakers in the prestige segment to have its own dial manufacturing facility situated in Pforzheim, a city in the south of Germany. This capability makes it possible to create highly individual products that lend every timepiece from Glashütte Original an unmistakable appearance. The most recent examples are the dials on the new SeaQ and SeaQ Panorama Date diver’s watches, which are made using a number of different characteristic techniques.

Diver’s watches are characterised by their striking appearance. As a rule, black dials predominate, presenting highly visible numerals, indexes and hands with generous luminous coatings along with solid metal cases with rotating bezels to set the dive time. There are good reasons for all of this, of course. In contrast to most wristwatches, with an almost limitless range of different shapes and colours, these watches must also meet specific design requirements. Given their primary purpose and use in diving, it is particularly important that one be able to read the time easily – in daylight and in the dark, on land and under water. But as great as the similarities among diver’s watches may be, there remains sufficient freedom of design to create an individual look and feel. Glashütte’s designers already proved this point in the late 1960s when they developed the first Glashütte diver’s watch. The look they created at the time, with its eye-catching Arabic numerals and striking hands, served as an inspiration for the new diver’s watches from Glashütte Original: the SeaQ and the SeaQ Panorama Date.

The debut models are presented with a total of four different dial versions. Of these, the two for the SeaQ models are 30.5mm in diameter, and in terms of colour and design are closely modelled on their historic predecessors. The slight difference between the versions lies in the lettering on the dial. While on the edition limited to 69 pieces one finds, as with its historic predecessor, “25 Rubis, Shockproof”, the unlimited model reads: “Glashütte i/Sa”. The two 33.1mm diameter SeaQ Panorama Date dials, produced in black and blue versions, set a number of new accents. Along with the larger window for the Panorama Date at 4 o’clock, the most obvious differences vis-à-vis the smaller SeaQ versions are the applied numerals and indexes, which give the dial as a whole a three-dimensional quality.

A great deal of effort for a perfect result
Every dial starts out as a blank, which is punched from a strip of metal, in this case brass. At the same time two studs at the edge and later four so-called catch holes are pressed into each blank, which serve to lock it in place at the subsequent processing stations. In a further step the date window is created, later enhanced by a stamped decorative frame. Subsequently a central hole is inserted, from whence the hands will subsequently circle the dial. Additional, almost invisible holes are drilled for the SeaQ Panorama Date version, into which the small feet of the appliques are fitted and then welded in place at the back. To complete these basic steps, the dial is then punched from the blank, an operation that gives it its definitive diameter.

At this point the surface treatment begins. With the assistance of a grinding and polishing machine and a special liquid (emulsion) the dials are first ground and then polished to a high-gloss finish. This is the necessary prerequisite for the subsequent application of the sunray finish, which is performed using a vertically rotating brass brush. And now colour comes into play. Galvanisation gives the dials their black or blue hue, depending on the version. The dialmakers need a great deal of experience and sustained concentration in order to produce identical results with the same high quality for the entire edition. Once the dials have been rinsed in clear water and dried, they are ready for the application of numerals, indexes, the logo, lettering and additional details.

Subsequent processing of the two dial versions follows diverging paths. For the smaller SeaQ models, the numerals and index lines are first applied to the dial in a light primer colour. A soft rubber pad then picks up the ink from an etched plate (cliché) and impresses it with exceptional precision onto the surface of the dial. The same process, using white printing ink this time, is performed for all the other details. In a final step, the primed numerals and indexes are carefully filled in by hand with Super-LumiNova luminous material in a colour known as “Old Radium”. While for the SeaQ Panorama Date the logo, lettering and minute ring are also added using the pad printing technique, the numeral and index appliques are mounted by hand. These appliques are also inlaid with a Super-LumiNova coating – in this case in bright green or white (on black or blue dials, respectively). To complete the process, the dials undergo rigorous testing for quality before setting off on their journey to Glashütte for final assembly.