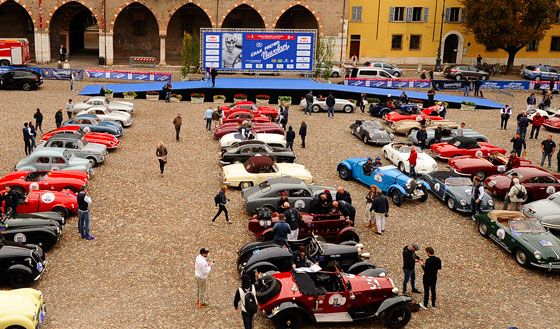 As official timekeeper for the 29th consecutive year, Eberhard & Co closely followed the 2019 edition of the Nuvolari Grand Prix.

This regularity competition, reserved for cars produced between 1919 and 1972, took place from September 20th to 22nd in Mantua.

The crews set off from the historic Piazza Sordello, to reach the scenic roads of Lake Garda, up to the Brenzone del Garda and ending the first stage in Bologna. The second stage led them to cross the unique scenery of Central Italy, passing through the Piazza del Campo in Siena and Piazza Grande in Arezzo, ending in Rimini. In addition to the Mendola and Faenza trials, the way back to Mantova included a detour to the Imola racetrack, where regularity trials took place. Mario Passanante and Raffaella De Alessandrini, aboard their Fiat 508 C (1937), are the winners of this competition.

For thirty years, Eberhard & Co has enjoyed an unwavering relationship with Tazio Nuvolari, one of the world’s greatest motor-racing champions. The Nuvolari Grand Prix is a true adventure that brings together 300 vintage cars each year driven by enthusiasts from all over the world, ready to tackle a 1,000 km journey between Lombardy, Veneto, Emilia Romagna, Le Marche and Tuscany.