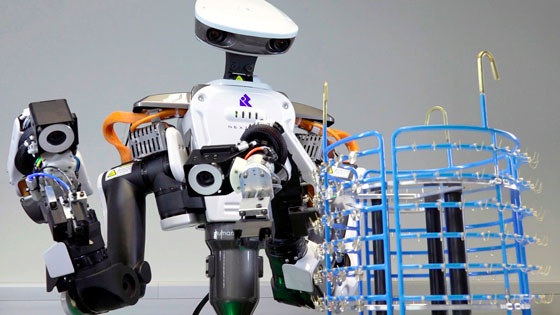 Designed by a famous Japanese Manga author, the Nextage humanoid robot has been specially conceived for integration into the human working environment. In the watch industry, it is able to perform collaborative work in production facilities without the need for any special interface or connection to the machines.

Automation is nothing new in the industrial world where robots have operated side by side with human beings for decades now. However, for the first time in history, Nextage humanoid robots can be integrated easily and rapidly into environments designed for human beings. In other words, the robot can interact with the means of production or assembly in exactly the same way as a human being. Its cameras detect modifications and with the help of its two arms it can do its job just like a human operative. It manages its tasks through the conventional man-machine interface, for example the tactile screen of a numerical machine control.

Habitually, automation is assumed to require arduous work of integration and high investments. Nextage changes all that. The workplace does not have to be modified at all. Fitted on a carriage, the robot is very easy to put in place. It just needs a compressed air and power (220V) supply.

The Nextage robot base incorporates an industrial PC. To program this computer, the operator simply has to connect up the screen and keyboard. Today, Rollomatic serves clients of two kinds: those who use turnkey solutions for which the firm provides all-round programming within its Humanoid Power division and those who have chosen to be completely autonomous and for whom comprehensive training in programming is provided.
To date, Rollomatic has already installed some ten Nextage robots in its Swiss clients’ plants. In Japan, on the other hand, these humanoids are already used very extensively, especially on assembly lines where they cooperate and interact with human colleagues.

Located in Landeron, the Rollomatic company is a Swiss private enterprise which specialises in the design and manufacture of high precision CNC machines to sharpen cutting tools for cylindrical grinding and laser cutting of tools made of ultra-hard materials. Founded in 1988 by Michel Rollier, the current Chairman and CEO, it has a 12,000 m2 production site.