The Oyster, a superlative chronometer 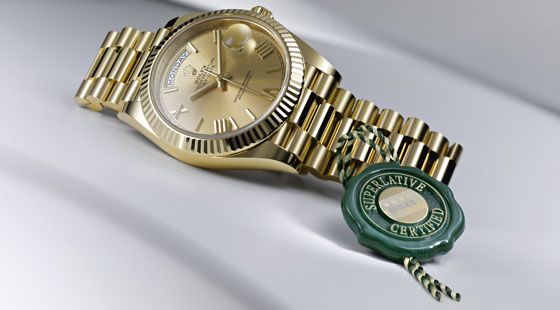 Since its early days, the Oyster watch has been known for its superlative performance.

The notion of superlative chronometer was first formulated in the late 1950s and has formed a centrepiece of the dial markings of all oyster watches ever since. Now this designation has been reinforced with the introduction of a new Rolex certification.

90 years after its creation, the Oyster has again redefined horological performance. The criteria that made Rolex watches «Superlative Chronometers» in the late 1950s have now been reinforced to establish a new standard of excellence for mechanical watches. Rolex has developed unparalleled testing methodologies and new high-technology equipment to certify each of its watches and award them the status of Superlative Chronometer. This exclusive designation attests that every watch has successfully undergone a series of special final controls conducted by Rolex in its own laboratories, and according to its own criteria which exceed watchmaking norms and standards. These tests complement the official COSC (Swiss Official Chronometer Testing Institute) certification of the movements.

The certification applies to the fully assembled watch, after casing the movement, guaranteeing superlative performance on the wrist in terms of precision, power reserve, waterproofness and self-winding. The precision of a Rolex Superlative Chronometer after casing is of the order of −2/+2 seconds per day, or more than twice that required of an official chronometer. This precision is tested by Rolex using an exclusive metho-dology that simulates the conditions in which a watch is actually worn and is much more representative of real-life experience.

The Superlative Chronometer certification also covers waterproofness - which protects the movement not only from water but also from all external elements that could compromise its precision - as well as the self-winding capacity and the power reserve, pledging that a watch will continue to function with precision over the long term.

These tests systematically complement the qualification testing upstream, during development and production, which ensures the reliability and robustness of the watches as well as their resistance to magnetic fields and shocks.

The Superlative Chronometer status is symbolized by the green seal that comes with every Rolex watch and is coupled with an international five-year guarantee.

All tests are conducted after the movement has been cased, to be as faithful as possible to the conditions under which the watch will be worn by its owner. Exclusive testing methodologies are employed, making use of entirely automated high-technology equipment developed by Rolex.

Precision
Each movement is submitted to COSC (the Swiss Official Chronometer Testing Institute) for its official certification, after 15 days and 15 nights of testing involving seven eliminating criteria in five static positions and at three temperatures. All Rolex movements obtain this official Swiss chronometer certificate.

After casing the movement (an operation which can affect precision by several seconds per day), Rolex tests the precision of each watch over a 24-hour cycle, in seven static positions as well as in a rotating rack, according to an exclusive methodology that simulates real-life wear. The tolerance criteria are much stricter than for the official certification with regard to the average rate deviation, the daily precision as perceived by the wearer. The deviation for a Rolex Superlative Chronometer must not exceed −2/+2 seconds per day, after casing, versus −4/+6 seconds per day required by COSC for the movement alone.

Self-winding
The winding power of the Perpetual rotor self-winding module is checked by exclusive means to ensure that all the components interact optimally and are not subject to any obstruction or friction at casing.

Waterproofness
The waterproofness of each watch is tested a first time by subjecting it to excess internal air pressure and then by immersion in water in a hyperbaric tank. Watches guaranteed waterproof to a depth of 100 metres (330 feet) are tested at a water pressure equivalent to their rated depth plus 10 per cent, while divers’ watches - waterproof to 300, 1,220 and 3,900 metres (1,000, 4,000 and 12,800 feet) - are tested with an additional safety margin of 25 per cent. The air tests and water tests are performed according to an exclusive methodology developed by Rolex to obtain extremely precise and reliable results.

Power reserve
All watches are fully wound at the beginning of the tests, and the power reserve of each watch is checked according to the specifications for the various movements by determining how long it runs before stopping.

A Rolex signature
The designation «Superlative Chronometer Officially Certified» inscribed on the dial of each Oyster is a true signature of Rolex watches. Formulated in the late 1950s, this inscription symbolizes the brand’s tireless pursuit of chronometric excellence, given the pioneering role it played in developing wristwatch precision from early in the
20th century.

In 1910, in Switzerland, a Rolex became the first wristwatch to obtain official chronometer certification. In 1914, a similar Rolex wristwatch was granted the first «Class A» precision certificate by the famous Kew Observatory in Great Britain, the highest authority in the world in terms of precision, and responsible for the certification of marine chronometers. Rolex’s invention of the Oyster in 1926, the first waterproof wristwatch in the world, was aimed primarily at protecting the high-precision movement from external
elements.

The markings on the dial of Rolex watches have evolved over time to reflect the brand’s pursuit of precision. From «Chronometer», it was changed to «Officially Certified Chronometer» in the late 1930s, before attaining its definitive form «Superlative Chronometer Officially Certified» some 20 years later. These various designations attest to Rolex’s continuous innovation to ensure the highest degree of precision for its watches over time and to perpetuate the excellence of the Oyster.

Officially certified Chronometer
A chronometer is defined as a high-precision timekeeper officially certified for its capacity to measure time without deviating from the exact time by more than a few seconds per day. Currently, one of the seven eliminating criteria is the maximum tolerance for men’s mechanical watch movements: a loss of four seconds per day or a gain of six seconds per day. This precision must be attested to by an independent entity after 15 days and 15 nights of rigorous tests. In Switzerland, a movement that fulfils the criteria receives a chronometer certificate issued by the Swiss Official Chronometer Testing Institute (COSC).

But it was not always so. Before 1951, the regulations concerning the «chronometer» designation were quite different, with the official definition originally being «a precision watch [...] having the capacity to obtain an official rating certificate». A chronometer could thus be certified by its own manufacturer. To guarantee the quality of its chronometers, Rolex chose to have them officially certified. And, to underscore this difference, the brand changed the inscription on its dials in the late 1930s from «Chronometer» to «Officially Certified Chronometer».

Superlative precision
In 1951, official certification became obligatory for all. A triumph for Rolex, which had produced almost 90 per cent of all the chronometers that had been officially certified since 1927. Rolex itself created a red seal to attach to each watch, with the inscription «Officially Certified Chronometer». But, wanting to continue to differentiate its chronometers from others, the brand set its sights on another goal: obtaining certificates avec mention (certificates of superior performance). According to the old rules, movements whose precision proved superior in the tests received a certificate with the citation «Especially good results». From the early 1950s, Rolex founder Hans Wilsdorf became increasingly keen to have certificates avec mention, concluding by January 1959, «We have reached a point where we must obtain all our certificates avec mention!» and adding, «It is thus that the prestige of Rolex will increase».

An important technical innovation paved the way for this achievement. In 1957, Rolex launched a new generation of movements, the 1500 calibres, equipped with a balance wheel with gold Microstella screws, offering excellent chronometric performance. (Today, Microstella nuts have replaced the screws.) The rate results achieved showed greater precision than the criteria for obtaining a mention. To mark these exceptional qualities, Rolex created the term «Superlative Chronometer».

This designation would thereafter be added to the dial marking to constitute the well-known phrase «Superlative Chronometer Officially Certified». It first appeared in the late 1950s on Datejust and Day-Date models. Since then, the meaning of the term has continued to evolve in order to reflect the technical development of Rolex watches and their performance, while always underscoring the notion that Rolex chronometers surpass the era’s standards.